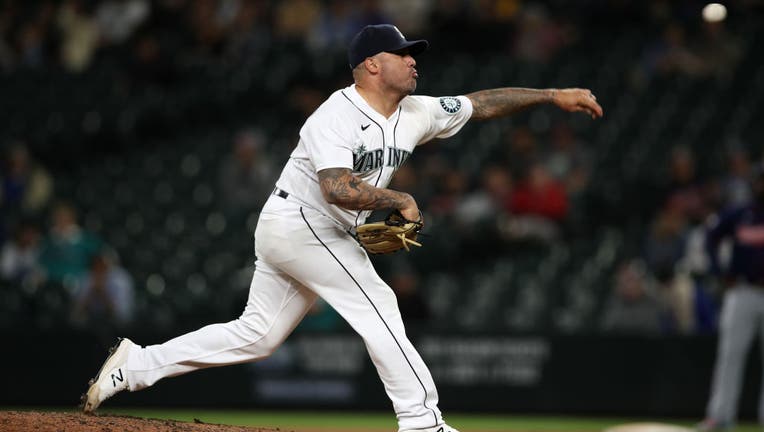 SEATTLE - JUNE 16: Héctor Santiago #57 of the Seattle Mariners pitches during the game against the Minnesota Twins at T-Mobile Park on June 16, 2021 in Seattle, Washington. The Twins defeated the Mariners 7-2. (Photo by Rob Leiter/MLB Photos via Gett

SEATTLE - Seattle Mariners pitcher Héctor Santiago was suspended for 80 games Thursday by Major League Baseball following a positive test for external testosterone, exactly one month after he was banned for 10 games when he became the first player penalized under the sport’s crackdown on grip-enhancing substances.

While the sticky substance penalty was with pay, the suspension under MLB’s drug program will cost him about half his $700,000 major league salary.

"In 2020, while I was not on the roster of a MLB club, I consulted a licensed physician in Puerto Rico who diagnosed me with a condition and recommended hormonal replacement therapy," Santiago said in a statement issued through the Major League Baseball Players Association.

"Because I did not play in 2020, I did not consider that this therapy could ultimately lead to a positive test under MLB’s joint drug program. That said, I alone am responsible for what I put in my body, and I was not careful. Therefore, I have decided for forgo my right to an appeal in this matter and accept the suspension. I apologize for any harm this has caused the Seattle Mariners, Mariners’ fans, my teammates, and most importantly, my family."