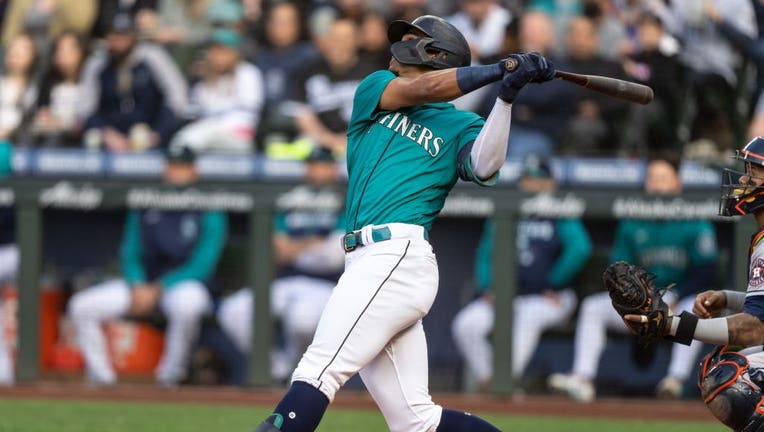 SEATTLE, WA - MAY 27: Julio Rodriguez #44 of the Seattle Mariners hits a two-run home run off of starter Justin Verlander #35 of the Houston Astros that also scored Ty France #23 during the first inning at T-Mobile Park on May 27, 2022 in Seattle, Wa

SEATTLE - After being shut down by Justin Verlander twice already this season, the approach by the Seattle Mariners this time around was to be overly aggressive.

"I said it to the club before the game, ‘If it looks like you can hit it hard, swing at it. Take our chances,’" Seattle manager Scott Servais said. "And that’s what we did tonight."

Rookie Julio Rodríguez hit the first of Seattle’s four home runs off Houston’s ace, and the Mariners thumped the Astros 6-1 on Friday night.

Rodríguez, Kyle Lewis, Ty France and Taylor Trammell went deep off Verlander, tying his career-high for homers allowed in a start. Verlander (6-2) entered with seven earned runs allowed in 51 2/3 innings this season and gave up six to the Mariners, all via the long ball.

"I think I made a lot of really hittable pitches and just needed to execute a little bit better," Verlander said.

Rodríguez got the Mariners started with a two-run opposite field homer in the first inning on the first pitch he saw from Verlander. Four batters later, Lewis unloaded with his first of the season, also a two-run homer. Lewis’ long ball was estimated at 441 feet and was his first since May 28 last year before suffering a knee injury that required surgery and forced the 2020 AL Rookie of the Year to miss the rest of the season.

"We’ve faced him enough times to know that runs are hard to come by," Lewis said. "So just trying to be aggressive as possible. That’s one thing we preached in the pregame and try to really go out and execute. It’s actually a good job of seeing the pregame transition into the game."

France added a solo homer run in the third, his seventh of the season, and Trammell barely cleared the fence in right-center field in the sixth inning.

"They had a good game plan. Kind of kept me off balance all night. Was never able to get into a good rhythm," Verlander said. "I had one kind of quick inning, but other than that it was a bit of a struggle."

On the other side, Seattle’s Chris Flexen tossed a gem, rebounding from three consecutive shaky outings. Flexen (2-6) allowed one run and seven hits over seven innings with six strikeouts. Flexen has allowed five earned runs in 18 innings over three starts against Houston this season.

"I just tried to flip the script. Been struggling lately and tried to get back to how it was last year," Flexen said. "Be a better competitor and get back to execution for me and was able to do that tonight."

Houston’s lone run came on Jose Siri’s fielder’s choice in the second inning. Houston was held to three runs or less for the seventh time in the past 11 games.

Verlander allowed four homers in a game twice while pitching for Detroit — both against Cleveland in 2006 and 2016 — and once with the Astros against the Tigers on July 15, 2018.

Seattle selected the contract of LHP Roenis Elías from Triple-A Tacoma and designated RHP Riley O’Brien for assignment. Seattle had an open roster spot after optioning struggling reliever Drew Steckenrider to Tacoma on Thursday. Steckenrider was one of Seattle’s top relievers a year ago but is 0-2 with a 5.65 ERA.

It’s the second stint this season for Elías with the Mariners.

Mariners: RHP Ken Giles (finger) is expected to soon start a rehab assignment with a mix of Tacoma and Class-A Everett. ... RHP Erik Swanson (elbow) could throw off a mound before the end of the weekend and be sent out on a rehab assignment next week. ... INF Abraham Toro (shoulder) should be ready ot come off the 10-day IL when eligible next week.

Astros: RHP José Urquidy (4-1, 2.94) is coming off his best start of the season throwing 6 2/3 innings allowing one run and striking out 10 in a victory over Texas.

Mariners: RHP Logan Gilbert (4-2, 2.60) looks to throw at least seven innings for a third straight start. Gilbert allowed three runs on five hits in his last start against Boston and had a no decision.