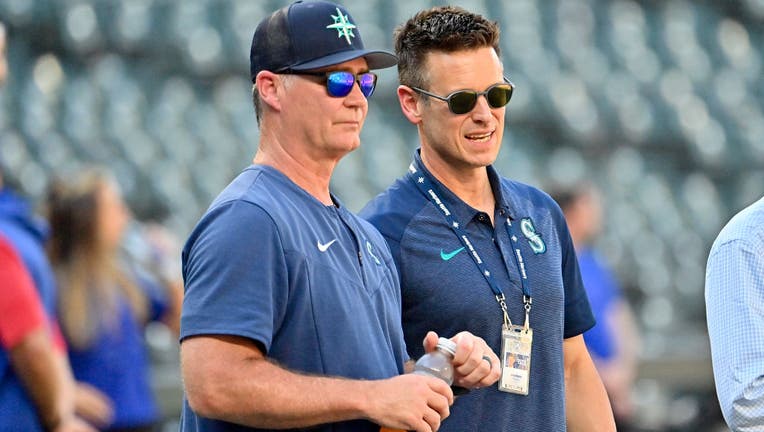 SEATTLE - Just as it has in the franchise's previous 45 seasons, the 2022 campaign of the Seattle Mariners fell short of their intended goal of reaching the World Series.

But unlike so many of those previous seasons, the optimism for what lies ahead doesn't seem unwarranted.

"The goal is to win the World Series. And we want to get better and that means better everywhere," general manager Justin Hollander said on Wednesday.

The Mariners snapped a streak of 21 seasons without reaching the playoffs by earning a Wild Card spot and advancing to the ALDS for the first time since 2001. A massive weight has finally been lifted off the franchise's shoulders and many young star appear primed to carry the team into the future.

If the team can make some meaningful additions to the roster this offseason, the Mariners can enter 2023 as real contenders to break another barrier as the only franchise to have never reached the World Series.

"We had an awesome year. Really excited about the progress we made. We also finished 16 games in the Astros or whatever it was," Hollander said. "… We want to get better and that means better everywhere. I think we have high expectations for the group that we have to get better. And we also know that we probably need to augment the group a little bit so that could come by trade, development, free agency, but I do think we want to get better."

Here's some of the numerous topics covered by Hollander, president of baseball operations Jerry Dipoto and manager Scott Servais during their season-ending press conference on Wednesday:

Dipoto said that the reason Jesse Winker was not with the team for the playoffs was because he was in New York having surgery on an injured left knee. He will also need surgery to address the neck injury that landed him on the injured list before the start of the playoffs.

"I think it was a factor all year long," Dipoto said. "And the combination of the knee and the neck, impossible for me to tell you how that affected him. Especially since that was really the only version of Jesse that we've known or seen. This guy was an awesome offensive player for the five years prior to this and obviously did not have the offensive year that he expected or that we expected.

Winker was also one of the worst defensive players in the sport. He had -16 runs saved per Fielding Bible, which was tied for sixth-worst in all of MLB. Even if Winker can return to form offensively for next year, his defensive deficiencies make him nearly unplayable in the field.

But Winker is under contract for next season and he'll be a part of next year's team unless they trade him this offseason. So finding a way for Winker to get to be his best self for next year is still a priority for the Mariners.

"The big thing is you got to get healthy," Servais said of Winker. "You got to get the knee taken care of. The neck issue is a real issue. It's something that has gotten worse over the course of the year, crept up at a very inopportune time for him right at the end here and getting taken care of that and getting on to next year is the most important thing for him and for us right now."

Julio Rodríguez sustained a small fracture to his left pinky finger sliding into second base on his double in the eighth inning of Saturday's season-ending loss to the Astros.

"Very similar injury to what [Eugenio Suárez] experienced back in Anaheim," Dipoto said. "Believe that came on Saturday night that was found and his exit is exit physical on Monday. That will resolve itself without any consequence in about a month we think."

Muñoz will need surgery to address a foot injury that had been bothering him throughout the season.

"He's likely to undergo a procedure to resolve that issue, which may take a little longer than the other guys but we don't expect it to affect his 2023 season," Dipoto said.

Raleigh will see a specialist to examine his injured thumb. He had a fractured thumb and a torn UCL that hampered him through the closing weeks of the season.

"The physical and emotional toughness that he showed in the final six weeks of this season when he was playing a lot and especially in September when he was playing through a pretty painful injury, especially when you catch baseballs that are flying at very high speeds with unpredictable movement. I can't say enough about the job that Cal did and gutted his way through it and had huge moments for us," Dipoto said of Raleigh.

Dipoto said that Lewis is no longer considered injured and they will need to wait and see how we handles the offseason and gets to spring training to figure out where he'll be going forward.

"We'll see him in the spring and hopefully we see the dynamic version of Kyle Lewis we saw in 2020 and we saw at points in time in 2022," Dipoto said. "It's been a tough road for Kyle. He's a very talented player that can change the course of what your lineup looks like if he shows up ready to go."

Servais said there's no intention for any changes to his coaching staff at this point.

"We've got a good thing going right now and no reason to shake it up at all," Servais said.

Haniger is set to be a free agent this winter after playing the last six years for the Mariners. The Mariners can tender him a qualifying option for next year for $19.65 million that would work somewhat like restricted free agency in the NFL.

A qualifying offer can be made through the fifth day after the World Series, and a player has a week after that to accept. If Haniger is given a qualifying offer and doesn't accept, the Mariners would receive a draft pick as compensation at the end of either the first round or at the end of competitive balance round B with the placement depending on numerous factors.

Haniger said he wants to remain in Seattle and the Mariners said Wednesday that dialogue remains open with Haniger's representatives.

"I loved Mitch when we acquired and I love him today," Hollander said. "I probably text or talk to his agent more than any other throughout the last couple of years up to an including during the playoffs. I think everyone would like to see us find a way to find common ground with Mitch, but players work a long time to get to free agency. It's really hard to get six years of service to get there. And I know Mitch, as much as he wants to be here, also wants to gauge what else is out there. So we'll keep talking."

Haniger had a career-year for Seattle in 2022 with 39 home runs and 100 RBI along with a .253 batting average in 157 games played. However, a bout with COVID-19 and a high-ankle sprain forced Haniger to miss most of the first four months of the year. He hit .246 with 11 home runs and 34 RBI in 57 games player for Seattle this year.

"We do love what he brings to the table and I think everyone in our group would identify Mitch as the guy who prepares himself for the moment as much as anybody and that is a positive cultural thing that really has value. We'll weigh that as we get into the offseason," Hollander said.

The Mariners need additional help in their middle infield this offseason. There are numerous shortstops that will be available on the free agent market this winter, headlined by Trea Turner, Xander Bogaerts, Dansby Swanson and Carlos Correa, who is able to opt out from his contract with the Minnesota Twins.

The Mariners are happy with J.P. Crawford as their option at shortstop. There's a high likelihood that he will remain their starting shortstop next year as Dipoto said they're preference would be to sign someone to play second base.

However, Dipoto did leave a slight crack of the door open for a discussion on that topic should they land a free agent at the spot this offseason.

"Our great preference would be that we can land a shortstop that would like to go play second base," Dipoto said. "But we're not going to close the door to anything in that regard. J.P. is our shortstop and he's a he's an emotional leader for us. We feel like he does a very good job in anything that we asked him to do.

"He'll line up for us opening day at shortstop and the goal is to find someone to put around him. And if we do find someone who plays shortstop, that person could very likely move to second base. But that's a discussion for then and not now. J.P. is our shortstop. We signed with to play shortstop and that's what we intend to do."