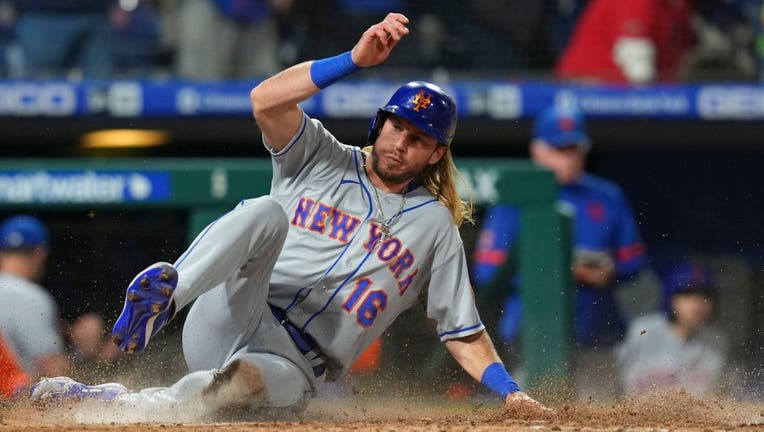 PHILADELPHIA, PA - MAY 05: Travis Jankowski #16 of the New York Mets slides home safely in the top of the ninth inning against the Philadelphia Phillies at Citizens Bank Park on May 5, 2022 in Philadelphia, Pennsylvania. The Mets defeated the Phillie

The Seattle Mariners claimed outfielder Travis Jankowski off waivers from the New York Mets on Monday to help with depth in the absence of injured All-Star center fielder Julio Rodríguez.

Jankowski, 31, has appeared in 43 games with the this season, batting .167 with 11 runs scored, two RBI, eight walks and three stolen bases. He was designated for assignment by the Mets on July 29.

With Rodríguez on the 10-day injured list after taking a pitch off his right wrist on Saturday in Houston and utility man Dylan Moore dealing with back spasms, Jankowski will bolster the depth in the outfield in the interim.

The Mariners designated left-handed pitcher Danny Young for assignment to open a spot on the 40-man roster for Jankowski's addition.

Young, 28, made his debut with the Mariners on May 9. He appeared in two games, allowing three runs on seven hits over 3 ⅔ innings with two walks and five strikeouts.

Outfielder Marcus Wilson cleared waivers and was assigned to Triple-A Tacoma after being designated for assignment last week.

Additionally, new Mariners starter Luis Castillo – acquired in a blockbuster trade with the Cincinnati Reds on Friday night – joined the team in New York ahead of their series with the New York Yankees. Castillo is expected to make his first start for Seattle on Wednesday against the Yankees.

Left-handed pitcher Brennan Bernardino was optioned to Triple-A Tacoma to clear a spot for Castillo's addition on the 26-man roster.

The Seattle Mariners have acquired All-Star right-handed starter Luis Castillo in a trade with the Cincinnati Reds in exchange for a package of top prospects that included Noelvi Marte, Edwin Arroyo and Levi Stoudt.

Misiewicz, 27, was designated for assignment on July 31. He made 17 appearances out of the Seattle bullpen this season, going 0–1 with a 4.61 ERA with three holds, six walks and eight strikeouts. He was optioned to Tacoma on June 10. In 13 games with the Rainiers, Misiewicz did not record a decision while posting a 3.65 ERA. He walked six and struck out 13 while holding opposing hitters to a .208 average.

Misiewicz appeared in 104 games for the Mariners over the last three seasons.