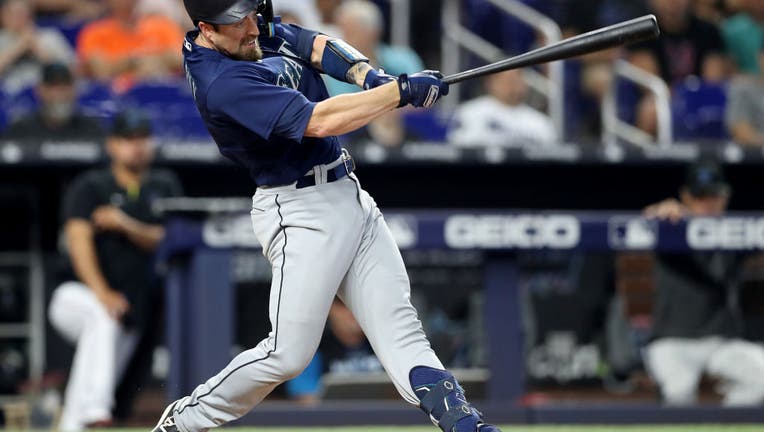 MIAMI, FLORIDA - MAY 01: Tom Murphy #2 of the Seattle Mariners at bat against the Miami Marlins at loanDepot park on May 01, 2022 in Miami, Florida. (Photo by Megan Briggs/Getty Images)

Seattle Mariners catcher Tom Murphy will miss the rest of the season as he requires surgery to address a dislocated shoulder sustained last month.

Murphy was injured in a game against the Tampa Bay Rays on May 6 while tagging a runner at home plate. The injury immediately forced him from the game and he's been unable to return to action.

Murphy rested the shoulder and had a platelet-rich plasma injection as part of the rehab process as he tried to get back on the field. Eventually, it became clear he wouldn't be able to clear that hurdle.

"He tried to everything he could to get back," manager Scott Servais said. "He did a number of different treatments to try to get it back and going. It just wasn’t taking. It was time for him to shut it down, which is hard for him."

Murphy had experienced prior dislocations to his shoulder that eventually built to the significant instance last month.

Murphy was off to a great start to the season for Seattle. After batting just .202 over 97 games played last year, Murphy was hitting .303 with two doubles, a home run and eight walks in 14 games played for the Mariners.

"It’s hard for him and It’s hard for us," Servais said. "He means a lot to our team and what he does behind the scenes, even when he’s not playing to help our pitchers and catchers out. The biggest thing is he’s got to get healthy and we’ll get him back after that."

Cal Raleigh and Luis Torrens have served as the catching options for Seattle in Murphy's absence. They are the only other catchers on the team's 40-man roster. Joe Odom, Andrew Knapp, Josh Morgan and Brian O'Keefe are the options at Triple-A Tacoma currently, though Morean is on the injured list.

France had his left arm wrenched backward when A's third baseball Sheldon Neuse was running by him up the first baseline. The throw from Eugenio Suárez forced France to reach out to his left to make the catch. Neuse then caught France's glove as he passed, which wrenched France's wrist and arm backward.

France immediately dropped to the ground and began holding his left arm in pain before coming out of the game. He was replaced by Dylan Moore.

France has been Seattle's best hitter this season, entering Thursday with a .319 average, 14 doubles, 10 home runs, 20 walks and 43 strikeouts in 69 games played.