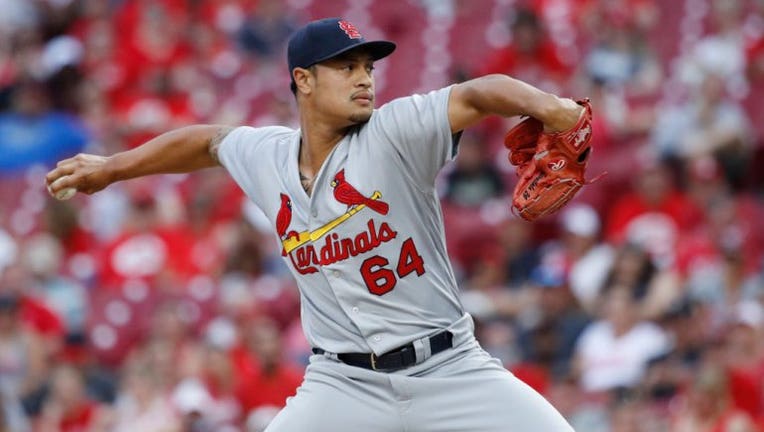 Sam Tuivailala #64 of the St. Louis Cardinals pitches in the eighth inning against the Cincinnati Reds at Great American Ball Park on June 9, 2018 in Cincinnati, Ohio. The Cardinals won 6-4. (Photo by Joe Robbins/Getty Images)

Tuivailala is 3-3 with a 3.69 ERA in 31 appearances for St. Louis this season, his second full season in the big leagues. He'll immediately jump into the playoff race with Seattle holding a one-game lead over Oakland for the second wild card in the American League.

Tuivailala also gives Seattle versatility. He's worked more than one inning in eight of his 31 appearances. He's held right-handed batters to a .230 average and has not allowed a run in 21 of 31 outings. He also helps fulfill general manager Jerry Dipoto's goal of acquiring players that will be controllable for years to come. Tuivailala isn't arbitration eligible until 2020.

"Sam is in the midst of his second consecutive solid big league season, and has pitched in parts of four major league seasons but has barely two years of service time," Dipoto said. "We view this as a move for our present and our future."

Tuivailala will join a bullpen that's been worked extensively in numerous close ball games. Seattle is 27-12 in one-run games this season.

Elledge has quickly risen among the rankings of minor-league prospects in the Mariners organization. Elledge was recently rated as the No. 10 prospect in Seattle's organization and was 5-1 with a 1.17 ERA and nine saves in 31 games for Single-A Modesto.