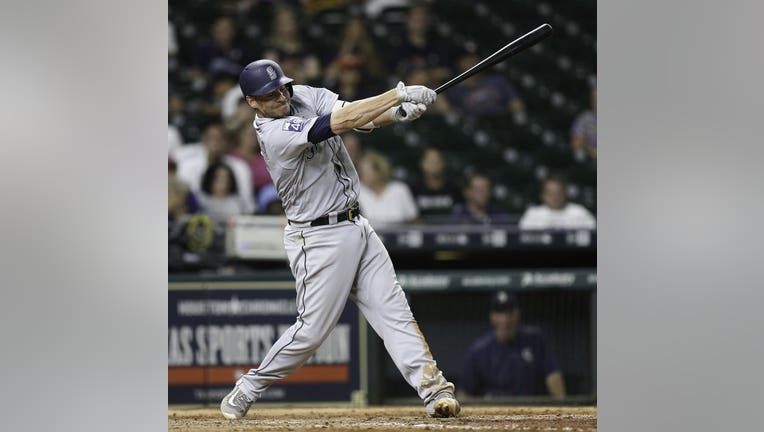 Danny Valencia #26 of the Seattle Mariners hits a home run in the 10th inning against the Houston Astros at Minute Maid Park on July 17, 2017 in Houston, Texas. (Photo by Bob Levey/Getty Images)

SEATTLE - Kyle Seager and Danny Valencia hit back-to-back homers in the 10th inning to lift the Seattle Mariners to a 9-7 win over the Houston Astros on Monday night.

The wild back and forth game was tied at 7-7 entering the 10th when Seager, who finished with three hits, connected off Tony Sipp (0-1) on a shot to the seats in right field. Valencia added an insurance run when he launched a slider to center field three pitches later.

Mike Zunino and Nelson Cruz also homered for the Mariners as they tied a season high with four homers to win their fifth straight game.

Yovani Gallardo (4-7) allowed a hit and two walks in a scoreless ninth for the win and Edwin Diaz struck out two in a scoreless 10th for his 17th save.

Cruz tied it in the seventh and Zunino put Seattle on top with his homer in the eighth. A sacrifice fly by George Springer scored a run to tie it at 7-7 in the bottom of the eighth.

Jake Marisnick and Carlos Beltran both homered for the Astros on a night when All-Star shortstop Carlos Correa left in the fourth inning after jamming his left thumb on a swing.

Houston used a four-run sixth, highlighted by a two-run homer by Beltran, to take a 6-5 lead.