Mariners' Jesse Winker was ejected after the brawl during Sunday's game and a fan sent him a pizza.

ANAHEIM, Calif. - The Seattle Mariners and the Los Angeles Angels were in a lengthy brawl during the second inning of Sunday’s game, which resulted in both managers and six players getting ejected.

Tensions leading up to the brawl

Both benches and bullpens cleared after Seattle’s Jesse Winker was hit by the first pitch of the second inning by Angels opener Andrew Wantz, who had also thrown a pitch behind the head of the Mariners’ No. 2 hitter, Julio Rodriguez, in the first inning.

Winker reacted to getting hit by angrily yelling and gesturing at the Angels’ dugout, and the sides charged each other moments later. 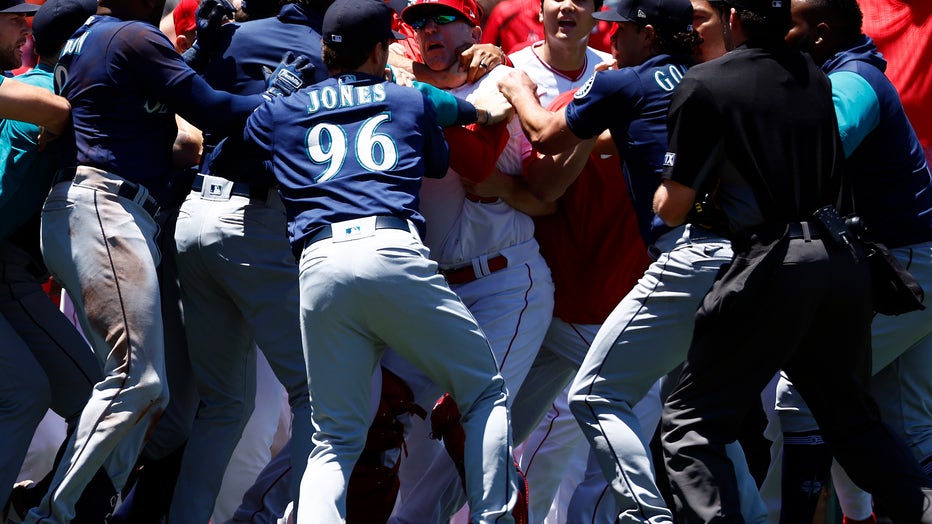 ANAHEIM, CALIFORNIA - JUNE 26: The Seattle Mariners and the Los Angeles Angels clear the benches after Jesse Winker #27 of the Seattle Mariners charged the Angels dugout after being hit by a pitch in the second inning at Angel Stadium of Anaheim on J

The brawl lasted about four minutes, with people from both teams appearing to throw multiple punches.

Suspensions are expected in the coming days.

Moments after Winker was ejected, Mariners fan Sofie Dill ordered a pepperoni pizza on DoorDash to be delivered to him in the Mariners visitors clubhouse at Angels Stadium.

Dill told FOX 13 Sports Director Aaron Levine that after Winker went to the clubhouse she decided to make the order.

Dill tracked the delivery and posted updates on Twitter.

After DoorDash driver Simranjeet successfully delivered the pizza, Dill posted his Venmo account for Mariners fans to contribute to a tip. The post has since gone viral.

"He said that he was super blessed to have gotten that delivery," she said.

After the ejection, a fan in the crowd tweeted a picture of a young fan crying.

The young fan, Abigail, came out to see Winker and Eugenio Suarez, who both used to play for the Cincinnati Reds.

The Mariners organization connected with Abigail, and she received a signed baseball from Winker.

"Sorry I was ejected! I hope to see you at another game soon," Winker wrote.

Apparently this wasn’t the first time Abigail witnessed her favorite player get ejected from a game.

This time last year, Abigail went to her first baseball game and her favorite player Joey Votto was ejected. Abigail got a signed ball from Votto during that game.

"I am sorry I didn’t play the entire game," he wrote.