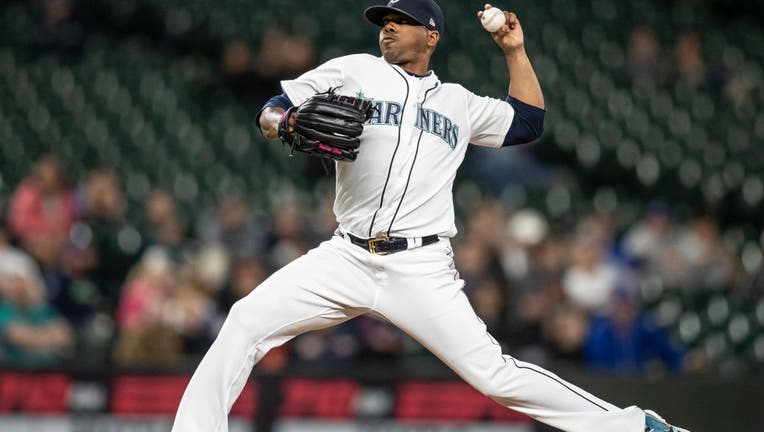 SEATTLE, WA - JUNE 20: Reliever Roenis Elias #55 of the Seattle Mariners delivers a pitch during a game against the Baltimore Orioles at T-Mobile Park on June 20, 2019 in Seattle, Washington. The Mariners won 5-2. (Photo by Stephen Brashear/Getty Ima

Elías, 33, takes the place of right-handed pitcher Drew Steckenrider, who was optioned to Triple-A Tacoma on Thursday. Because Elías was not a part of the team's 40-man roster, the team designated right-handed pitcher Riley O'Brien for assignment to clear a spot for Elías' addition.

Elías also replaced Steckenrider for the team's three-game series against the Toronto Blue Jays earlier this month. Steckenrider was placed on the restricted list as Canada's COVID-19 vaccination requirement kept him from making the trip across the border. Elías did not have to be on the 40-man roster to serve as a replacement in that instance.

Elías appeared in one game during the series in Toronto. He allowed a run on one hit and two walks.

Elías became the fifth player in franchise history to have three different stints with the Mariners, joining Mike Blowers, Raúl Ibañez, Norm Charlton and Jeff Nelson. He made his debut with the team in 2014 and pitched two seasons in Seattle. He returned to the team for the 2018-19 seasons before being traded to the Washington Nationals.

Elías has pitched in 14 games for the Rainiers this season. In 17 ⅓ innings of work, Elias has allowed seven runs (3.63 ERA) on 18 hits with five walks and 13 strikeouts.