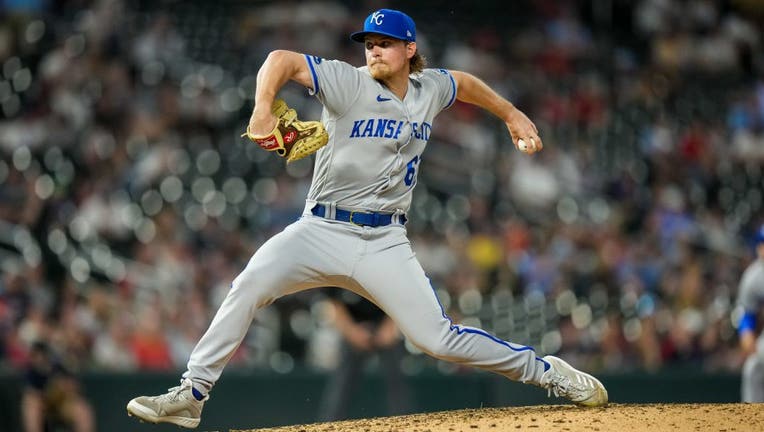 MINNEAPOLIS, MN - MAY 27: Gabe Speier #67 of the Kansas City Royals pitches against the Minnesota Twins on May 27, 2022 at Target Field in Minneapolis, Minnesota. (Photo by Brace Hemmelgarn/Minnesota Twins/Getty Images)

The Seattle Mariners have acquired left-handed pitcher Gabe Speier off waivers from the Kansas City Royals and right-handed pitcher Easton McGee from the Boston Red Sox in a trade for cash considerations.

Additionally, right-handed pitcher Casey Sadler and left-handed pitcher Ryan Borucki both cleared waivers and elected to enter free agency. The moves leave the Mariners with 36 players on their 40-man roster.

Speier, 27, made a career-high 17 appearances for the Royals last season, posting an 0-1 record with a 2.33 ERA with five walks and 14 strikeouts. He's played in parts of four MLB seasons for Kansas City with a career 0-2 record and 3.83 ERA with 15 walks and 35 strikeouts in 41 appearances primarily out of the bullpen. His lone start came as an opener against Texas in May, where he threw two innings with a hit and a strikeout.

McGee, 24, has only appeared in one game at the MLB level with the Tampa Bay Rays in October. He allowed an unearned run on four hits with a strikeout in three innings of work against the Houston Astros.

McGee has appeared in 101 career games in the minors with 91 starts across six seasons in the Rays organization. He's posted a 28-23 record with a 4.38 ERA with 86 walks and 333 strikeouts. McGee was designated for assignment by the Rays the day after his start and claimed off waivers by Boston.

McGee was a fourth-round pick by Tampa Bay in 2016.

Borucki, 28, appeared in 21 games for the Mariners this season after being acquired from the Toronto Blue Jays in a trade for minor league infielder Tyler Keenan in June. Borucki went 2-0 with a 4.26 ERA with six walks and 13 strikeouts for Seattle before landing on the 15-day injured list with a left flexor strain in early August.

Sadler, 31, missed the entire 2022 season as he recovered from surgery to repair his labrum in his right shoulder. Sadler had an 0-1 record with a 0.67 ERA with 10 walks and 37 strikeouts in 42 appearances for Seattle in 2021. The 0.67 ERA was the lowest in all of MLB and the lowest in team history for any pitcher with at least 30 innings of work.

Sadler has pitched in parts of six seasons for the Pittsburgh Pirates, Rays, Los Angeles Dodgers, Chicago Cubs and Mariners.