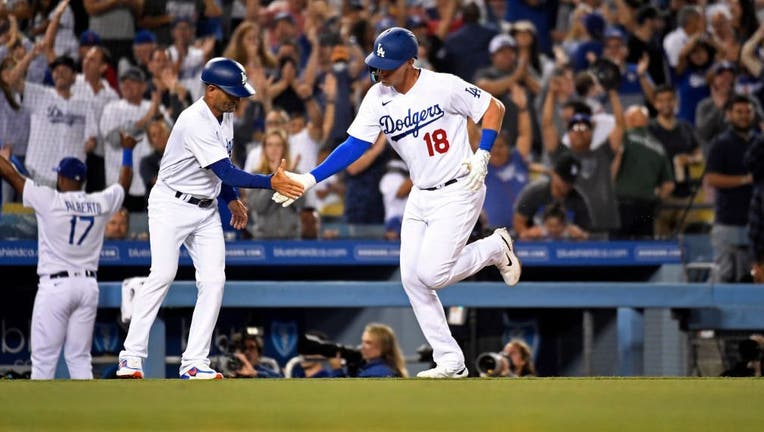 LOS ANGELES, CA - JULY 09: Jake Lamb #18 of the Los Angeles Dodgers is congratulated by third base coach Dino Ebel #91 after hitting a one run home run against relief pitcher Rowan Wick #50 of the Chicago Cubs during the seventh inning at Dodger Stad

Seattle received Lamb from the Dodgers in exchange for a player to be named later or cash considerations. Casali and Boyd come over from the Giants in exchange for minor league catcher Andy Thomas and right-hander pitcher Michael Stryffeler.

The Mariners designated outfielder Jack Larsen for assignment to open a 40-man roster spot for the addition of Lamb. Left-handed pitcher Tommy Milone was also released to clear a roster spot. Casali and Boyd are both on the injured list and working back to the major league roster.

"Really excited for what are probably under the radar moves that have a chance to really improve the depth of our roster as we head into these next couple of weeks and see what we can do with the final two months of this season," general manager Jerry Dipoto said.

Lamb, 31, is a Bishop Blanchet alum that played collegiately at the University of Washington before being drafted by the Arizona Diamondbacks in the sixth round of the 2012 MLB Draft. Lamb has appeared in 25 games for the Dodgers this season, batting .239 with 10 runs scored, five doubles, a triple, two home runs, four RBI and eight walks.

Boyd, 31, is also a Seattle-area native, having attended Eastside Catholic in high school and Oregon State for college. He was a sixth round pick of the Toronto Blue Jays in the 2013 MLB Draft. Boyd has not pitched this season as he had forearm flexor tendon surgery last September.

"I know both Jake and and Matt were overjoyed with the opportunity to be here for these next two months and see what it leads to," Dipoto said.

Casali, 33, has appeared in 41 games with San Francisco this season, batting .231 with 13 runs scored, three doubles, four home runs, 14 RBI and 15 walks. He's been on the injured list since July 5 with a right oblique strain.

Casali fills a big need for the Mariners in a backup catcher. Luis Torrens has struggled offensively this season and has never been a great defensive backstop. Torrens, 26, is batting just .208 with a .487 on-base-plus-slugging percentage. He has no home runs and just two doubles this season after mashing a career-high 15 homers last year.

Casali has appeared in 446 career games across nine seasons with the Tampa Bay Rays, Cincinnati Reds, and Giants. He also regularly worked with new Mariners' starter Luis Castillo during their time together in Cincinnati. Casali is a career .227 hitter with 130 runs scored, 55 doubles, a triple, 46 home runs, 145 RBI and 136 walks.

"Curt Casali fits that veteran backup catcher who works very well with pitchers, he's got some know-how, he's played in the postseason," Dipoto said. "He fits what we do and how we do it. And we feel like adding Curt also gives us someone who's very familiar with Luis Castillo."

Boyd spent the majority of his career with the Detroit Tigers, making 145 starts in 149 appearances over seven seasons. Despite the starter background, he's expected to move into the bullpen as a multi-inning reliever for Seattle coming back from injury.

"Our expectation is that early next week, he'll start a rehab assignment of his own and sometime in the next two-to-three weeks we'll have him back on the major league roster as well," Dipoto said. "Very likely in the role of multi inning reliever and you know, at something that we were looking to acquire so fits well."

Lamb with be a left-handed bat available off the bench that can play multiple positions in the field. He's played first and third base, and left and right field during his career with the Diamondbacks, Oakland Athletics, Chicago White Sox and Dodgers.

"He's played a bench role in years past that's where we see him fitting in our club," He can play the corners, DH. He has performed very well against right-hand pitching this year. So it gives us a nice offset with the right-hand bats."

Lamb is batting .254 with five doubles, a triple, two home runs and four RBI with eight walks and 22 strikeouts in 72 plate appearances against right-handed pitching this season for the Dodgers. That comes with an .808 OPS as well.

"The way it went with us is, you know like we are prone to do, we check in with everybody on everything and make sure that we've turned over all those stones and we did that with the Nats on Soto. And pretty early on we understood that the asking price was just going to be too much for us to bear. So we moved on and focused on other things. And you know, obviously the most notable was we focused on Luis Castillo and made it a priority to bring him to Seattle.

"But as far as the Soto deal goes, I don't know about you guys. It's the biggest trade I've ever seen. Phenomenal on both ends of it. I had a feeling in other conversations this morning that that's something that might be trending and I was fascinated when I saw the quality of players, the fact that another All-Star player in Josh Bell is is also headed to San Diego. That's a big move. That's a 'we're gonna win the World Series' type move for the Padres and it's a one-stop shop. Rebuild an organization for the Nats. So kudos to both ends. I think they both got what they were looking for."

The Mariners did not add a significant piece to the everyday lineup of the offense ahead of the deadline. Dipoto telegraphed that during his comments after the Castillo trade on Friday, noting the return of outfielders Mitch Haniger and Kyle Lewis to the offense as being boosts on their own.

"These players have to fit and coexist on a roster," Dipoto said. "And knowing that we anticipate having Ty France back in action tomorrow or Friday at the latest, we anticipate Julio [Rodríguez] rejoining the team when his 10 days [on the injured list] are up, all things trending in that direction. We do expect that Mitch  is going to be back very soon and we obviously just got Kyle back more recently and [Dylan Moore] is also trending to where he should be active at the 10th day when he's able to come off [the injured list].

"And with both Diego Castillo and Ken Giles, we feel like they are tracking maybe a week out from from where we are today. We do look forward to getting a pretty big influx of talent back from the IL in addition to the three players we added today plus Luis Castillo. So all in all a pretty productive time for us, sans the obvious which is planning a pretty rough road trip right now with a beat up and somewhat undermanned roster."