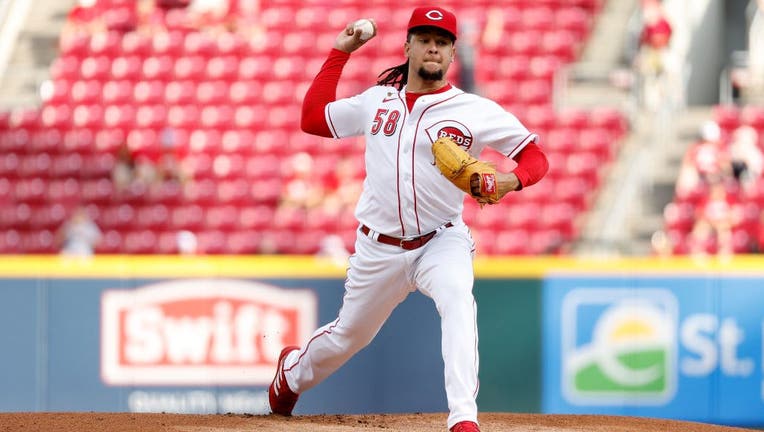 CINCINNATI, OH - JULY 27: Luis Castillo #58 of the Cincinnati Reds pitches during the game against the Miami Marlins at Great American Ball Park on July 27, 2022 in Cincinnati, Ohio. (Photo by Kirk Irwin/Getty Images)

The Seattle Mariners have acquired All-Star right-handed starter Luis Castillo in a trade with the Cincinnati Reds in exchange for a package of top prospects that included Noelvi Marte, Edwin Arroyo and Levi Stoudt.

The full deal with the Reds includes infielders Marte and Arroyo, and right-handed pitchers Stoudt and Andrew Moore.

Castillo, 29, was widely viewed as the best starting pitcher available on the trade market ahead of Tuesday's deadline. Castillo made his second All-Star team this season and has posted a 4-4 record with a 2.86 ERA with 28 walks and 90 strikeouts in 14 starts for the Reds. This month, Castillo has a 1.93 ERA with seven walks and 30 strikeouts in four starts.

"We see Luis Castillo as an impact, top of the rotation starter who's currently on top of his game," general manager Jerry Dipoto said in a statement. "Our goal remains to play in the postseason, now and in the years to come. We believe adding Luis is a big step in that direction."

Dipoto said the Mariners had spoken with the Reds about Castillo dating back to last year prior to the MLB lockout. They also completed a trade with the Reds in March that brought outfielder Jesse Winker and Eugenio Suarez to Seattle with discussions on Castillo occurring as well.

"We think he's one of the best pitchers in the league and we understood as far back as last year's G.M. meetings that the potential existed for him to be available and we wanted to be in play should that happen," Dipoto said after the trade.

The Mariners needed another starting pitcher in their rotation as rookie George Kirby is on an innings limit this season. Kirby threw 67 ⅔ innings last year for High-A Everett and Double-A Arkansas as he climbed through the Mariners system. He's already at 69 ⅓ innings pitched for Seattle this year. Throw in 24 ⅔ innings thrown for Arkansas and Triple-A Tacoma and Kirby is at 94 innings pitched for the season, which is the most he's ever thrown in a year.

"We do want to make sure that George stays on a regular turn and continues to contribute," Dipoto said. "He's been such a big part of what we've done to this point and he's a big part of what we'll do moving forward. For us, it's important that we do what we can to help him complete a 162-game season because he's never experienced that before."

Per Baseball America, in both 2019 and 2021 Castillo’s changeup was voted by managers, scouts and executives as the best in the National League. In 2019, he became the third pitcher in MLB history to record 3-plus consecutive starts with at least eight strikeouts and no more than two hits allowed, joining Rube Marquard for the 1911 New York Giants and Randy Johnson for the 1997 Mariners.

"He's done that pitching in Great American Ballpark," Winker said of Castillo and the hitter-friendly ballpark in Cincinnati. "He's elite and he's only getting better. … He's always gotten better year after year after year. It's another guy that we have that sky's the limit for and I'm excited that he's here."

Castillo is under contract through next season. His normal rest would have lined him up to pitch on Tuesday. He is likely to make his Mariners debut either Tuesday or Wednesday against the New York Yankees.

"He's a top of the rotation starting pitcher and he'll take his turn when his turn comes," Dipoto said.

To acquire Castillo cost the Mariners a significant price. Marte, Arroyo and Stoudt were the organization's first-, third-, and fifth-rated prospects, per MLB.com. Baseball America had the trio ranked as the first-, second- and 10th-best in the organization.

"We've done so much work over the course of these last three-and-a-half years or so and Noelve and Edwin and Levi and Andrew, all of these kids they are so much a part of what we have been building toward. And ultimately we knew there would come a time where we felt like it was our time to take a step forward. This is why you build strong, deep organizations and the talent that these guys bring to the table allowed us to go get a guy we thought was the top pitcher on the market."

Castillo solves the Mariners' starting pitching need. The need for help on the offensive side continues to exist as well. Dipoto said it's tougher to see where an answer to that question could come from before the deadline.

"On the offensive side, we're open to opportunity but it's much harder to see where that is going to happen with [Haniger] on his way back and we believe he is closer than far away now and actively playing," Dipoto said. "We view Mitch and the addition of Kyle Lewis last week as the move that our offense needed. That being said, we'll keep our ear to the street in the event that opportunity exists, it's just a little tougher to see where that might be."

Moore, who turns 23 next month, has made 25 relief appearances with Low-A Modesto this season, going 2-1 with a save and a 1.95 ERA. He has limited opponents to a .217 batting average against while walking 17 and striking out 58. Moore was originally was a 14th round pick of the Mariners in the 2021 MLB Draft out of Chipola College in Marianna, FL. In two minor league seasons, Moore is 2-2 with a save and a 3.83 ERA in 39 relief appearances.