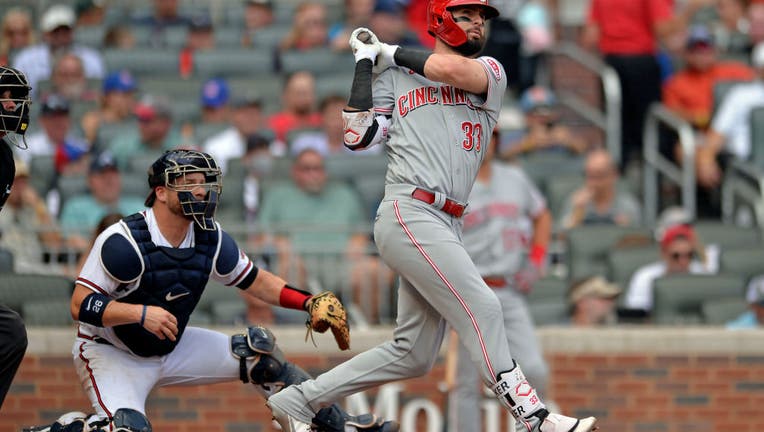 ATLANTA, GA - AUGUST 12: Jesse Winker #33 of the Cincinnati Reds hits a grand slam in the second inning against the Atlanta Braves at Truist Park on August 12, 2021 in Atlanta, Georgia. (Photo by Edward M. Pio Roda/Getty Images)

The Seattle Mariners are acquiring All-Star outfielder Jesse Winker and infielder Eugenio Suárez from the Cincinnati Reds in exchange for Justin Dunn, Brandon Williamson, Jake Fraley, and a player to be named later or cash considerations.

The agreement was first reported by Jeff Passan of ESPN.com.

"We’re incredibly excited at the chance to acquire two All-Star caliber players," General manager Jerry Dipoto said in a statement. "Jesse has been one of the premier offensive players in the league over the past two seasons, while Suárez brings a long track record as a power hitter. Our goal is to reach the postseason this year, and we feel that these additions give us the depth and impact in our lineup necessary to compete for one of those spots."

Winker, 28, has mostly been a left fielder during his five seasons in Cincinnati. He's a career .288 hitter with a .385 on-base percentage and a .504 slugging percentage. Winker is a left-handed bat that provides significant production against right-handed pitching. Winker has major splits with a .313 average and .961 OPS (on-base plus slugging) against right-handers and a .188 average and .600 OPS against left-handers.

"Obviously it's part of the business, it's what you sign up for when you sign,"Winker said, via Bobby Nightengale of the Cincinnati Enquirer. "But I can't wait to go to Seattle. I've heard nothing but amazing things about the city, about the team. We're trying to win, and I'm really, really excited about that. Looking forward to competing and I can't wait to get over there."

Suárez has primarily been a third baseman and would presumably assume that role from Abraham Toro.

"We want to add some impact to our offense and believe that, minimally, we want to go get one impact bat, whether that's free agent or trade remains to be seen. And if we can manage to swing both we'd like to get two," Dipoto said to reporters last week ahead of the trade.

Dunn, 26, posted a 3.94 ERA with 69 walks and 92 strikeouts in parts of 3 Major League seasons with the Mariners (2019–21). He made his Major League debut on Sept. 12, 2019 with Seattle vs. Cincinnati. Dunn was acquired by the Mariners from the New York Mets as part of the 7-player Robinson Cano-Jarred Kelenic trade in December 2018.

Williamson, 23, went 4–6 with a 3.25 ERA with 38 walks and 178 strikeouts in parts of 2 minor league seasons in the Mariners organization (2019 & ’21). He was originally selected by the Mariners in the 2nd round of the 2018 MLB First-Year Player Draft out of Texas Christian University.

Jerry Dipoto: Mariners intent on adding at least one bat to lineup