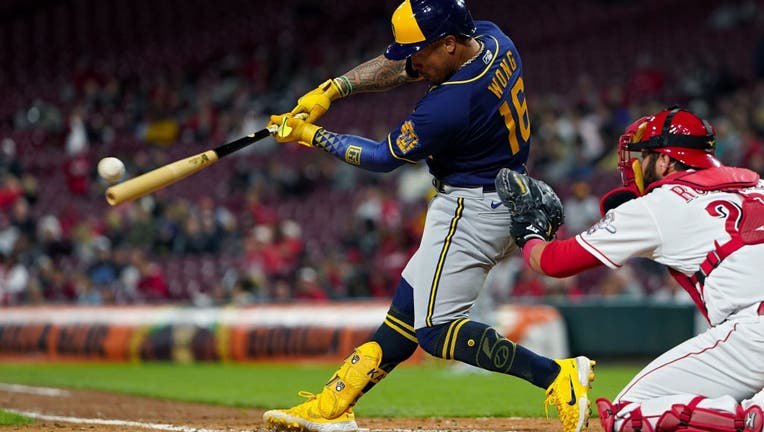 CINCINNATI, OHIO - SEPTEMBER 22: Kolten Wong #16 of the Milwaukee Brewers hits a home run in the sixth inning, his second of the game, against the Cincinnati Reds at Great American Ball Park on September 22, 2022 in Cincinnati, Ohio. (Photo by Dylan

The Seattle Mariners have acquired second baseman Kolten Wong from the Milwaukee Brewers in exchange for outfielder Jesse Winker and infielder Abraham Toro along with cash considerations.

Wong, 32, has been a long-time target of the Mariners. Seattle attempted to sign Wong as a free agent ahead of the 2021 season. However, the Brewers put a third-year option into the deal that led to his signing in Milwaukee.

"We have long coveted Kolten’s well-balanced all around game. He also brings veteran leadership and a winning pedigree that will make a difference for us both on and off the field," Mariners president of baseball operations Jerry Dipoto said in a statement

General manager Justin Hollander said that discussions with the Brewers had been active since the end of the season with progress toward a deal ramping up over the last week.

"I would say over the last week or so again we discussed the trade in a bunch of different forms, directly with Milwaukee, some discussion of multi-team trade, roping in a third and potentially fourth team. Over the last 72 hours, it really picked up steam to the point where we felt like we were close to a deal that we consummated this morning," Hollander told reporters during a video conference Friday afternoon.

Wong hit. 251 with 15 home runs, 24 doubles, four triples and 47 RBI last season for the Brewers with 46 walks and 88 strikeouts. His .770 OPS (on-base-plus-slugging percentage) ranked fourth among all second basemen in baseball last season to have played at least 100 games.

"Second base is really an area that we've struggled to get production out of, particularly offensively," Hollander said. "His game really seems to be trending upward year after year offensively, particularly against right-handed pitching. He's learning to elevate the ball. He makes a ton of contact."

Seattle had hoped that Adam Frazier would be that same type of offensive boost at the position last season. Instead, Frazier had his worst full season batting average (.238) and OPS (.612) of his career.

Wong is also a former gold glove winner at second base having won the award twice with the Cardinals in 2019 and 2020. Wong led the league in defensive runs saved in 2019 at second base (27 runs saved, per FieldingBible.com) and was 10th in 2020 (10 runs saved). However, Wong ranked as -1 run saved last season with the Brewers as he plummeted out of the top 20 at the position.

"I think he owned it at the end of the season," Hollander said of the defensive struggles. "He didn’t have his kind of year, particularly with his hands, that matched his own expectations he set for himself. He brought it up to me on the phone. He’s prepared to be much better defensively next year. He’s always been an outstanding defender. We think the range is still plus, his arm is still well above average for the position and obviously we have a very good infield coach in Perry Hill as well.

"He said he’s fired up to work with (Hill) and he’s fired up to be here. I think we’ll get the best version of Kolton. I don’t think that the plus defender just disappeared in six months. Everybody runs through hot and cold streaks whether it’s offensively or defensively. We view his defense as a big positive."

But as much as the move is about the addition of Wong, it's also about the subtraction of Winker.

Winker was a complete flop in Seattle after being acquired along with Eugenio Suárez in a spring training deal last March with the Cincinnati Reds. Winker hit just .219 with a .688 OPS. He had hit .305 with a .949 OPS the previous season in Cincinnati and was a career .288 hitter with a .888 OPS in five years with the Reds.

He had a pair of surgeries at the end of the season to address an injured left knee and a troublesome neck, which landed his on injured reserve during the final series of the regular season.

"I had a meniscus cleanup in my left knee and I had a disc replacement surgery in my neck," Winker told Milwaukee reporters of his injuries on Friday. "I had a herniated disc in my spine towards the end of the season and it was a bulging disc for most of the year. The side effects and symptoms of that right there, it’s painful. You have pain in your neck and it’s down your arms, it’s in your back. And then on top of that I had to deal with the knee. It provided challenges for me, for sure.

"But like I said, this is a no-excuse league. I didn’t have a good year. I had a bad year. So I got some things taken care of and I’m looking forward to being healthy and I’m just really excited to be a Milwaukee Brewer and to move forward."

While the injuries may be some explanation of Winker's struggles, it would seem short of the whole picture.

Winker was also one of the worst defensive players in the sport. He had -16 runs saved per Fielding Bible, which was tied for sixth-worst in all of MLB. Even if Winker can return to form offensively for next year, his defensive deficiencies made him nearly unplayable in the field.

Moving Winker gives the Mariners some more flexibility with their roster in how they will fill their one open outfield spot and the designated hitter role. Teoscar Hernández, acquired in a trade in November, will join Julio Rodríguez in the outfielder. Mitch Haniger remains a free agent and Jarred Kelenic will have a chance to earn the spot as well if he's not moved this offseason. Other options exist as well, such as the Mariners being linked to local product and former New York Mets outfielder Michael Conforto.

Hollander said corner outfielder remains an area of focus for them this offseason.

"I think we definitely want to be opportunistic in the marketplace right now, whether that's free agency or trade, to add more offense to our team if It's available," Hollander said. "So that is something we're looking at. Corner outfielder is a spot where we feel like we could add another bat having just subtracted a bat. So It's definitely something we're looking at."

Toro appeared in 169 games for the Mariners over the last two seasons after being acquired from the Houston Astros. He hit .206 with 19 doubles, two triples, 16 home runs and 61 RBI with 22 walks and 65 strikeouts. He managed only a .185 average last season in 109 games played for Seattle.