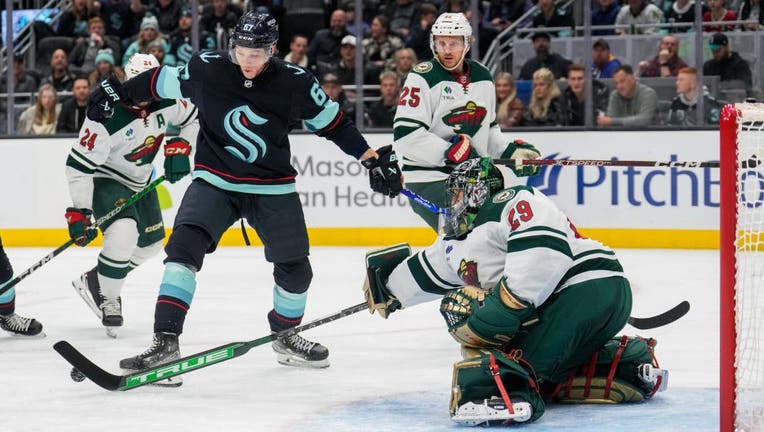 SEATTLE, WASHINGTON - NOVEMBER 11: Marc-Andre Fleury #29 of the Minnesota Wild knocks the puck away from the feet of Morgan Geekie #67 of the Seattle Kraken during the third period of a game at Climate Pledge Arena on November 11, 2022 in Seattle, Wa

SEATTLE - Sometimes you run into a hot goaltender.

The Kraken couldn't solve future Hall of Famer goaltender Marc-André Fleury as he turned away 28 shots in 1-0 shutout of Seattle on Friday night that snapped the team's five-game winning streak.

A Mats Zuccarello goal late in the first period served as the only offense for either side in the contest as the Kraken were unable to find a way to beat Fleury.

"We didn't get enough (chances) from the inside," head coach Dave Hakstol said. "In the third, we had three or four good looks from inside. Just couldn't find one off a rebound. We couldn't find a way to get one in behind. So It's that kind of night. You gotta find a dirty one, a greasy one somewhere and we weren't able to do that tonight."

Seattle was unable to convert on any of their four power play opportunities on the night. They even struggled to find any shots whatsoever with the man advantage as the Wild defense and Fleury kept the Kraken scoreless for the first time this season.

"It's finding the second play after that that we've got to do a little bit better job at," center Yanni Gourde said. "Finding an open guy, finding the late guy coming in, finding a puck to the net and finding seconds. I think we don't have enough shots on goal. When we're chasing a game like this, I think we need to find more shots."

Martin Jones continued his run of strong play in net for Seattle as well. Jones made 20 saves on 21 shots. The only goal of the night came on a bit of a bad bounce for Seattle. An off-target pass from Jon Merrill bounced off the side boards to Zuccarello in front of the net. Zuccarello's snap wrist shot beat Martin Jones to give Minnesota a 1-0 lead with 1:41 left in the first period.

"Jonesy was good tonight. He was rock solid," Hakstol said. And the one that beat him in the first is a bang-bang play off a quick turnover in the slot. Jonesy played a good hockey game tonight."

Jones also made a fantastic sliding save of Wild star winger Kyrill Kaprizov in the second period. Zuccarello fed a pass across the crease from his knees to a wide open Kaprizov on the back door. Jones managed to slide across and shutdown the chance for Minnesota. Jones also made a blocker save of a breakaway chance from Mason Shaw in the third period that kept the game a one-score contest.

The Kraken were unable to generate many quality offensive chances against the Wild. Despite having three power play chances through the first two periods, the Kraken only managed two shots on net with the man advantage and neither shot was particularly dangerous for Fleury to handle.

Seattle's penalty kill continued its run of strong form to negate three power play chances for the Wild. Dating back to their 3-1 victory over the Pittsburgh Penguins on Oct. 29, the Kraken have successfully killed off 16 straight penalties. Seattle had three successful kills against the Wild as a trio of hooking penalties from Vince Dunn, Schultz and André Burakovsky led to missed chances for the Wild.

"PK has been good lately and tonight was another example of that," defensman Justin Schultz said. "We skate so well and work so hard, it's tough for the other power plays and obviously Jonesy been rock solid in there for us again tonight."

The Kraken began to create more chances in the third period. A tip on net from Schultz was saved by Fleury. A turnover fell to Oliver Bjorkstrand and a shot turned away, then another turnover led to a shot from Adam Larsson. A backhand try from Gourde was also turned away by Fleury.

Hakstol pulled Jones with 2:08 left to play to put an extra attacker on the ice. Seattle fired six shots in the final 90 seconds, five of which ended up as saves by Fleury with one block from Jared Spurgeon. Bjorkstrand fired a wrist shot from the right circle that led to a rebound chance from Gourde in the closing seconds but time expired on the Kraken's rally attempt.

Seattle will host the surging Winnipeg Jets on Sunday at 5 p.m. PT. The Jets have won six of their last seven games with their only loss being a 2-1 overtime defeat to the Vegas Golden Knights, who are the best team in the NHL currently.

– Cale Fleury made his first appearance of the season with defenseman Jamie Oleksiak placed on injured reserve on Thursday. Oleksiak sustained a lower body injury in Tuesday's win over the Nashville Predators. Fleury played 13:09 for Seattle primarily alongside Schultz and Will Borgen.

– Magnus Hellberg, claimed off waivers from Ottawa on Thursday, was the backup goaltender to Jones against the Wild. Joey Daccord was returned to Coachella Valley after making one start for Seattle against the Calgary Flames. Hellberg spent training camp with Seattle before he was claimed by the Senators off waivers at the end of the preseason.