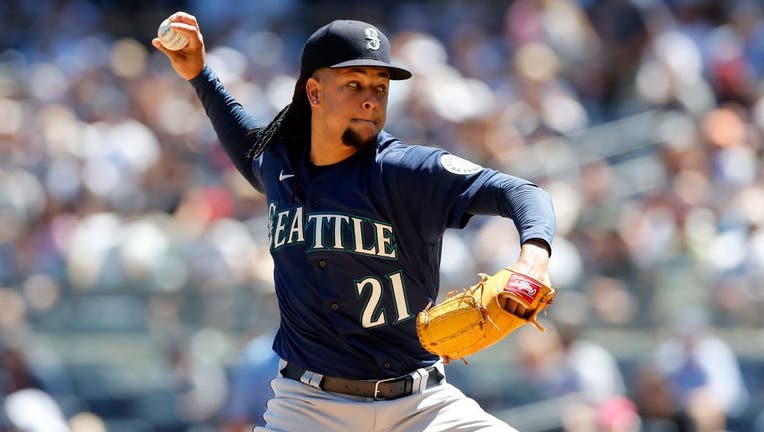 "My high school coach used to say pressure is something you put in your tires," Manoah joked Thursday. "This is just baseball. It’s just a game. Just got to go out there, have some fun and leave the pressure for your tires."

Luis Castillo starts Game 1 for Seattle, making its first postseason appearance since 2001. The Mariners went 5-2 against Toronto this season.

Manoah was 16-7 with a 2.44 ERA in his second big league season, anchoring a rotation that also includes two righties with $100 million-plus contracts, Kevin Gausman and José Berríos.

Still, with his combination of performance and big game poise, Manoah was Toronto’s clear-cut choice to take the ball in the opener.

"It feels like he’s been ready for this moment since he signed," interim Blue Jays manager John Schneider said of Manoah. "He lives for moments like this and embraces everything that comes with it, but still keeps the task at hand in the forefront. We’re excited for him to get us going."

"Alek has been nothing short of remarkable," Atkins said. "I haven’t been around a pitcher like him."

Likewise, Mariners manager Scott Servais has reason to feel good about Castillo, who went 4-2 with a 3.17 ERA in 11 starts for Seattle after being acquired from Cincinnati at the trade deadline.

"I couldn’t be any more confident in sending anybody out there," Servais said. "When you have a high-end guy like that, the fact that we traded for him, we just signed him to a long-term deal, it’s perfect timing."

A strong performance in Game 1 could be crucial in this best-of-three matchup.

Vladimir Guerrero Jr. and the Blue Jays, however, will get an extra edge from playing the entire series at home, where a loud, rabid fan base is ready for its first in-person look at postseason baseball since 2016, when Toronto made the second of consecutive ALCS appearances.

That 2016 team beat Baltimore at home to win what was then a one-game wild-card showdown, with Edwin Encarnacion’s 11th-inning homer sending Toronto to the division series.

When the six-year anniversary of Encarnacion’s blast passed on Tuesday, a video highlight of the homer showed up on Manoah’s Twitter feed, leading to a flurry of repeat views from the current Jays star.

"I couldn’t believe the energy and the atmosphere," Manoah said. "The building was shaking, man. I’ve kind of been using that to feel some of that energy that’s going to be there tomorrow."

Servais said left-hander Robbie Ray, who won the 2021 AL Cy Young Award with the Blue Jays after going 13-7 with a 2.84 ERA and 248 strikeouts, will face his former team in Game 2 on Saturday. Ray signed a $115 million, five-year deal with the Mariners last winter to pitch in big games like the playoffs. It’s been a rocky first season in Seattle for Ray, especially over the past month. In his final five starts, Ray had a 5.27 ERA and allowed eight home runs in 27 1/3 innings.

Gausman left his final start of the regular season because of a cut on his right index finger but threw a bullpen session Thursday.

As a result of their lengthy postseason absence, the Mariners don’t have much playoff experience. Carlos Santana has the most with 23 games during his time in Cleveland. Only eight other Mariners have appeared in a postseason game and two of them — Jesse Winker and Marco Gonzales — won’t be on the roster for the wild-card series. Ray has pitched in three playoff games and third baseman Eugenio Suarez has appeared in two.

The Blue Jays don’t have an abundance of playoff experience, either, although most core players got a two-game taste in 2020 when Toronto was swept at Tampa Bay in the wild card round that followed the pandemic-shortened season. The Blue Jays have a playoff-seasoned veteran in outfielder George Springer, who was World Series MVP for Houston in 2017. Springer has 19 home runs in 63 career postseason games.

The Mariners are still deciding whether to add minor league prospect Cade Marlowe to the playoff roster, even though the speedy outfielder has yet to make his big league debut. Marlowe hit 23 home runs and stole 42 bases at Triple-A Tacoma this season. He could be a replacement for Sam Haggerty, currently out with a strained left groin.

Mariners president Jerry Dipoto said Marlowe "does a little bit of everything," but singled out his baserunning and defensive abilities.

"In the postseason, those are really key things to have in terms of bench impact," Dipoto said. "I don’t know that you can make more impact off a bench than being able to put a plus defender out, or someone who can go steal a base. Cade can do those things and he can also hit the ball over the fence. We think he has a skill set that can impact a short series."