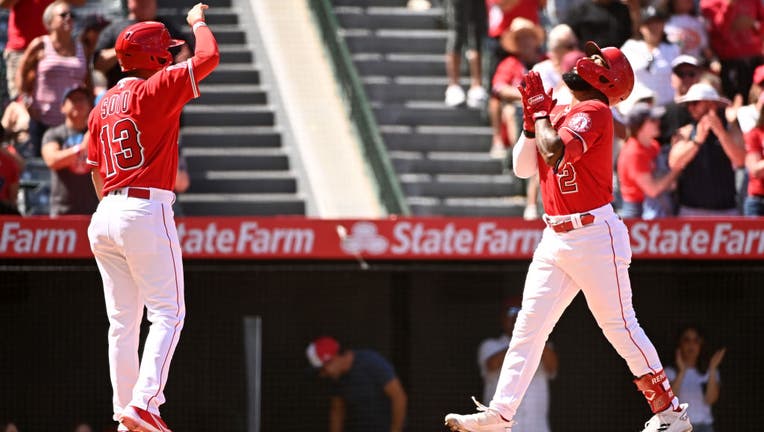 ANAHEIM, CALIFORNIA - SEPTEMBER 18: Luis Rengifo #2 of the Los Angeles Angels of Anaheim celebrates after hitting a two run home run with Livan Soto #13 in the third inning during a game against the Seattle Mariners at Angel Stadium of Anaheim on Sep

ANAHEIM, Calif. - Luis Rengifo hit a pair of home runs for the second time in three games, Livan Soto went deep for the first time and the Los Angeles Angels won their third in a row over the wild card-chasing Seattle Mariners, 5-1 on Sunday.

Seeking their first playoff appearance since 2001, the longest drought in the major leagues, the Mariners (80-64) saw their lead for the third and final AL wild card berth cut to four games over Baltimore (76-69).

After his first multihomer game on Friday, Rengifo has gone deep four times in the series and 15 times this season.

"I can’t believe it," Rengifo said. "I don’t try to hit a homer, I just try to hit the ball and the ball is carrying. I’m so happy for that."

He got his first career leadoff homer, a drive off Marco Gonzales (10-14), and broke a 1-1 tie in the third with a two-run drive that followed Soto’s single for his first big league hit.

"Marco is a pretty good pitcher. Just try to stay aggressive with him," Rengifo said. "The only thing I can control is swing the bat and hit the ball. See it, hit it."

Soto went 2 for 3 in his first start, a day after entering as a pinch runner and grounding out in his debut.

Soto, called up for the first time Saturday when David Fletcher went on the injured list, gave the Angels a 5-1 lead in the seventh with a two-run homer down the right-field line.

"Everyone’s dream is to get into the big leagues and get that first hit, so the nerves settled down a little bit," Soto said through an interpreter. "Then I got the homer and was running the bases and my legs were shaking."

Reid Detmers (6-5) gave up one run and four hits in six innings, and three relievers finished a six-hitter.

"We knew coming into this series, the Angels are one of the more aggressive teams in throwing off speed, certainly the breaking ball, in the league," Mariners manager Scott Servais said. "We have not done a very good job of adjusting to that. We have seen it from a number of their pitchers. Last night it was (Shohei) Ohtani, today it was Detmers, with a different look obviously."

Gonzales (10-14) gave up five runs and seven hits over 6 1/3 innings. He allowed three homers for the fourth time this season.

Mariners: OF Julio Rodríguez missed his second straight game because of lower back tightness. "I just feel like a few days’ rest is going to be the best thing for it, especially right now," Rodriguez said. "It’s better to be cautious with it." ... OF Mitch Haniger went 0 for 4 with two strikeouts after missing four consecutive games with lower back tightness.