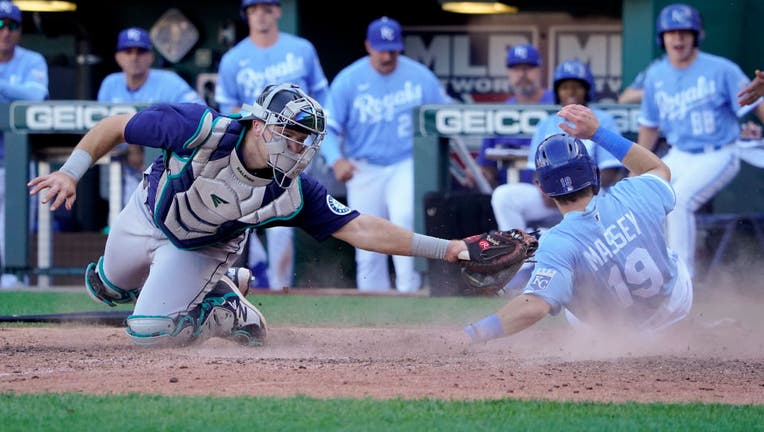 KANSAS CITY, MISSOURI - SEPTEMBER 25: Michael Massey #19 of the Kansas City Royals scores against Cal Raleigh #29 of the Seattle Mariners in the sixth inning at Kauffman Stadium on September 25, 2022 in Kansas City, Missouri. (Photo by Ed Zurga/Getty

KANSAS CITY, Mo. - Luis Castillo, fresh off signing a rich contract with Seattle, got chased as the Kansas City Royals erupted for 11 runs in the sixth inning and a wild, 13-12 win Sunday that cost the Mariners a chance to move up in the AL wild-card standings.

The Mariners stayed in the third wild-card spot, a half-game behind Tampa Bay. Seattle remained four games ahead of Baltimore for that last AL playoff slot.

"We haven’t played good baseball on this trip," Mariners manager Scott Servais said. "We need to get back to playing baseball the way we have all year that’s allowed us to be in this position. We do have a good opportunity to make the playoffs and the next ten games will define where we’re at."

Mitch Haniger singled twice during an eight-run fifth for the Mariners, and they led 11-2 going into the bottom of the sixth.

"We did a lot of good things offensively, had a commanding lead in the ballgame, and we let our guard down a little bit and didn’t shut it down," Servais said. "I go back to the thing we talk about all the time, controlling the strike zone. We gave them an opportunity to come back in the ballgame because we didn’t throw strikes."

Castillo struggled to begin the sixth, and Michael Massey homered and drove in four runs during the Royals’ biggest inning since 2004.

"I just wanted to get something up in the zone and put a good swing on it," Massey said. "I wasn’t trying to hit a homer; I was just trying to find the barrel."

Said Royals manager Mike Matheny: "We had good at-bats from everyone and they did it against a playoff-contending club."

"Whenever you have a game where you are down that many runs and you find a way to get into it, it shows the fight and determination of this team," he said.

Castillo, an All-Star traded from Cincinnati to the Mariners in midseason, got a $108 million, five-year contract that begins next season. The deal was announced Saturday.

Holding a nine-run lead, Castillo struck out the first batter in the Royals sixth. After a walk and Massey’s homer, Castillo was pulled after another walk.

"(The top of the fifth, with Seattle batting) was just a very long inning," Castillo said. "It was a long inning and I was on the bench for most of it, and I think it affected me."

"He hasn’t been as sharp," Servais said. "Balls missing location, been in the middle of the zone a little bit."

The Royals wound up combining seven hits, including a two-run single by Massey, and five walks off four pitchers to take the lead. Matt Brash (3-5) faced four batters and failed to record an out.

"We didn’t throw strikes," Servais said. "You don’t throw strikes in this league you are gifting them opportunities. It started with Luis. Luis couldn’t get the ball in the zone and we had to go to some guys in the pen who have been good at doing that and they couldn’t do it."

Hunter Dozier finished with three hits and two RBIs for the Royals.

Royals starter Max Castillo, who was recalled from Triple-A Omaha prior to the game, left after a bases-loaded walk to Cal Raleigh put the Mariners ahead 3-2 in the fifth. He allowed six runs on six hits and four walks.

The Mariners finished their road schedule at 45-36, while the Royals completed their home schedule at 38-43.

Mariners OF Jesse Winker left Sunday’s game with a bruised left wrist after being hit by a pitch for the second time in the game; post-game X-rays were negative.

The Mariners play Tuesday at home. LHP Robbie Ray (12-10, 3.60 ERA) faces the Texas Rangers, who have not announced a probable starter.