Castillo pitched 8 ⅓ innings of scoreless ball for Seattle in neutralizing one of the most potent lineups in all of baseball. Castillo allowed six hits with five strikeouts on 108 pitches for Seattle in arguably the most dominant postseason start in franchise history.

No Mariners starter had even thrown at least seven scoreless innings in the playoffs until Castillo's effort on Friday. Freddy Garcia pitched 6 ⅔ scoreless innings in Game 1 of the ALCS in 2000 as part of a 2-0 Seattle victory, which was the only other shutout in franchise playoff history.

The Mariners jumped on a wild Manoah in the first inning to jump out to an early lead. Manoah hit leadoff hitter Julio Rodríguez on the left hand with the fourth pitch of the game to give Seattle a quick base runner. After advancing to second on a groundout from Ty France, Eugenio Suárez doubled into the right field corner to drive in Rodríguez to give Seattle a 1-0 lead.

Then Cal Raleigh delivered a flashback to Friday night's playoff clinching victory over the Oakland Athletics. Much like he did against Domingo Acevedo in the ninth inning, Raleigh battled with Manoah to force a full count. Raleigh then hammered a 95-mph sinker Manoah left in the middle of the strike zone out to right field for a two-run home run that gave the Mariners a 3-0 lead.

That's all the cushion Castillo would need.

Toronto only threatened Castillo mildly in the third and fifth innings. A two-out single from George Springer and an infield single from Bo Bichette put a pair of runners on in the third, but Vladimir Guerrero Jr. flew out to center field to end the inning.

Then in the fifth inning, Whit Merrifield's soft liner to left dropped in for a single and Springer reached on another infielder grounder with two outs. Castillo then induced a groundout to second from Bichette to snuff out the threat.

Castillo then punctuated his effort with K's of Matt Chapman, Raimel Tapia and Danny Jansen in the seventh inning. Castillo retired Merrifield to open the eighth inning before hitting Springer on the left wrist with his 108th pitch of the game.

RELATED: Here's how you can watch Mariners Wild Card road games at T-Mobile Park this weekend

Andrés Muñoz polished off the eighth inning in relief of Castillo. Matt Chapman managed a two-out double off Muñoz in the ninth and advanced to third on a wild pitch, but Tapia grounded out to second to seal the victory for Seattle.

Manoah had a 0.88 ERA in six starts in September for Toronto as he was named American League pitcher of the month. But against Seattle, Manoah wouldn't make it through the sixth inning.

Manoah hit Rodríguez with a pitch for the second time in the game, and it would, again, come back to bite him. Ty France singled to right to advance Rodríguez to third, and he scored on a fielder's choice groundout from Suárez to give the Mariners a 4-0 lead.

Raleigh is the first player in Mariners history to homer in their first career postseason at-bat.

Suárez had the only multi-hit game for Seattle and picked up two RBI in the win. Rodríguez got his first postseason hit with a single in the seventh.

The Mariners are now one victory away from a spot in the AL Division Series and a meeting with the division-rival Houston Astros. 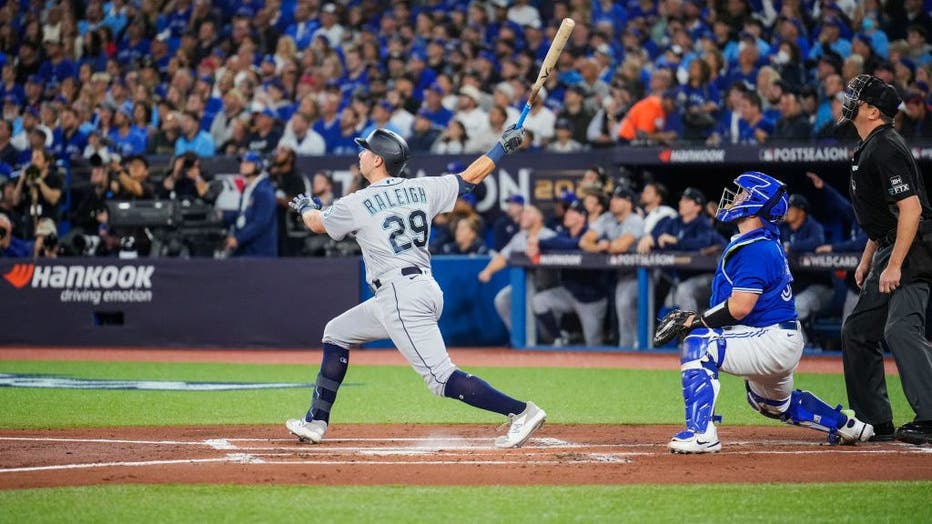 TORONTO, ON - OCTOBER 07: Cal Raleigh #29 of the Seattle Mariners hits a two run home run against the Toronto Blue Jays during the first inning in Game One of their AL Wild Card series at Rogers Centre on October 7, 2022 in Toronto, Ontario, Canada.