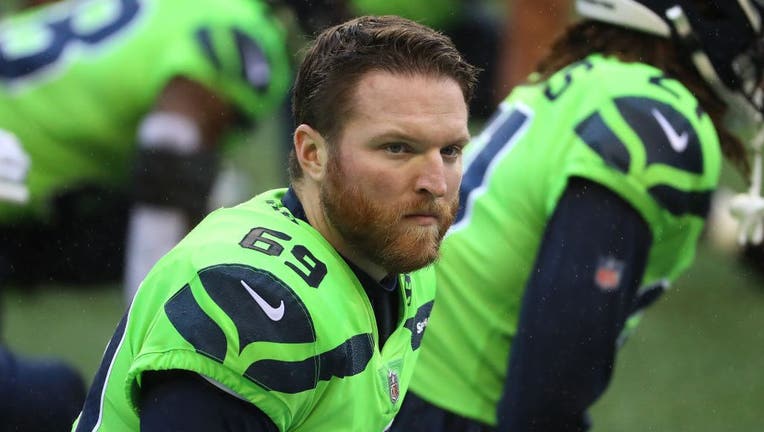 SEATTLE, WASHINGTON - OCTOBER 11: Tyler Ott #69 of the Seattle Seahawks looks on before their game against the Minnesota Vikings at CenturyLink Field on October 11, 2020 in Seattle, Washington. (Photo by Abbie Parr/Getty Images)

The Seattle Seahawks have ruled out long snapper Tyler Ott and linebacker Alton Robinson for Monday night’s season opener against the Denver Broncos.

Ott missed the week of practice after dislocating his shoulder in a practice early in the week. Head coach Pete Carroll said it’s something Ott has had happen before, but it’s likely to require surgery this time.

"It didn’t seem to be a problem at all but then they just got in a bad spot, an awkward position and it just went," Carroll said. "He probably has to get it fixed."

The Seahawks signed Carson Tinker to the practice squad early in the week as a backup option to Ott. He’ll be elevated from the practice squad to play against the Denver Broncos on Monday night. He was the long snapper for kicker Jason Myers for two years with the Jacksonville Jaguars in 2015-16.

"So they’ve been together before and they’ve got background there," Carroll said. "So that really helps kind of the assurance that we’re going to be OK and all that. He looked great and we haven’t missed a beat. He’s a pro. You can tell."

If Ott needs surgery, he will likely be moved to injured reserve to open up a roster spot for Tinker’s elevation.

In addition to Ott, linebacker Alton Robinson was ruled out with cornerback Artie Burns being doubtful to play.

"We’re talking about that now trying to determine what’s necessary for him," Carroll said. "He sprained his knee, and we’re not quite sure if he’s ready to work through it or if he needs some work on that. That’s what we’re trying to determine. It could go either way."

Seattle could elevate Joshua Onujiogu from the practice squad for additional depth at the position this week in Robinson’s place.

Burns is still working back from a groin injury and won’t be able to play against the Broncos.

"He's a long way from getting out there," Carroll said.

Burns injury likely puts rookie Tariq Woolen into the starting role at right cornerback. Woolen has started at the position throughout the preseason for Seattle and has played quite well outside of a shaky opening drive in his preseason debut in Pittsburgh.

"Maybe the biggest surprise is how far Tariq Woolen has brought it to this point," Carroll said. "He's had a fantastic camp and been really impressed with his makeup and his calmness and poise about handling and stuff and handling the people he's gone against. He's not been shaken at all."

Sidney Jones is ready to go after missing time over the last several weeks with a concussion.

Jones had been the starter on the left side at cornerback before his injury. Michael Jackson has handled the spot in Jones’ and Burns’ absence. Fellow rookie Coby Bryant has also worked at the spot, but has been focusing on the nickel position the last few weeks in camp.

Second-round pick Boye Mafe is set to play as well after missing time with a shoulder injury,

Fellow second-round pick Ken Walker III is questionable to play after having a hernia procedure three weeks ago.

"He's running around. He looked incredible two days ago moving, and so he's questionable," Carroll said.

Left guard Damien Lewis is also questionable due an ankle injury sustained in the preseason game against the Chicago Bears.

"He's in that same category (as Walker)," Carroll said. "He practiced some, got some stuff done. So he's really close to being ready to go so he's questionable also."

Phil Haynes will start at left guard if Lewis can’t go against Denver.

Inside linebacker Josey Jewell is doubtful for the Broncos with a calf injury.