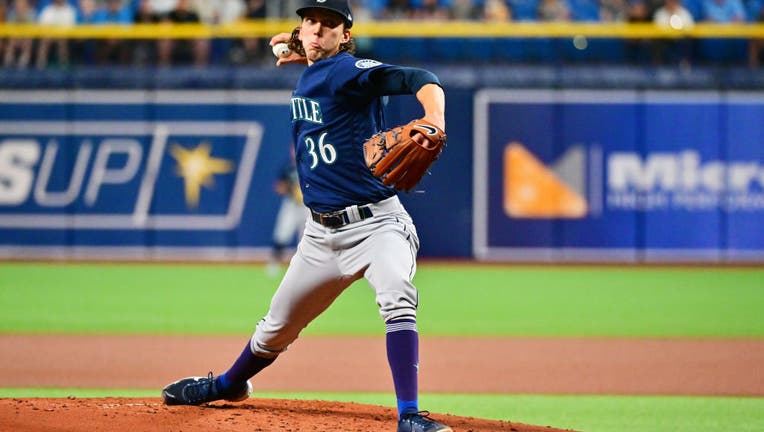 ST PETERSBURG, FLORIDA - APRIL 26: Logan Gilbert #36 of the Seattle Mariners delivers a pitch to the Tampa Bay Rays in the first inning at Tropicana Field on April 26, 2022 in St Petersburg, Florida. (Photo by Julio Aguilar/Getty Images)

SEATTLE - Seattle Mariners pitcher Logan Gilbert has been named the American League Pitcher of the Month for April after posting a 3-0 record and 0.40 ERA in four starts.

Gilbert, 24, threw 22 ⅓ innings in April with just one earned run allowed over four starts for the team. Opposing hitters batted just .188 against Gilbert for the month with 22 strikeouts and four walks.

After finishing the month with a 0.40 ERA, Gilbert owns the lowest ERA in a single month in Mariners history among pitchers with at least 20.0 innings, surpassing Mark Langston’s 0.50 ERA (3 ER, 53.2 IP) in Sept. 1988. Langston's mark came over six starts that month where Gilbert's came in only four.

Gilbert is the first Mariners player to win American League Pitcher of the Month since James Paxton received the honor in July, 2017, and 14th player in franchise history to earn the award (19th instance).

Gilbert followed up his strong April with another strong outing on May 1 in Miami. Gilbert went 5 ⅔ innings against the Marlins with just one earned run allowed in earning his fourth win of the season in the 7-3 victory over the Marlins.

For the season, Gilbert is now 4-0 with a 0.64 ERA. He is scheduled to start next on Friday against the Tampa Bay Rays.

The moves were made to comply with reduced roster limits as rosters are cut from 28 to 26. Rosters were expanded for the first three weeks of the season as spring training was shortened due to lengthy collective bargaining discussions.

Sheffield, 25, appeared in four games out of the bullpen for the Mariners this season. He had allowed just one hit with two walks and two strikeouts in 4 ⅔ innings pitched. He has yet to allow an earned run this season.

Walton, 27, appeared in one game as a pinch runner and scored a run.

In five games with Tacoma this season, he is batting .381 with four runs, a double, a triple, an RBI, a stolen base and 4 walks.