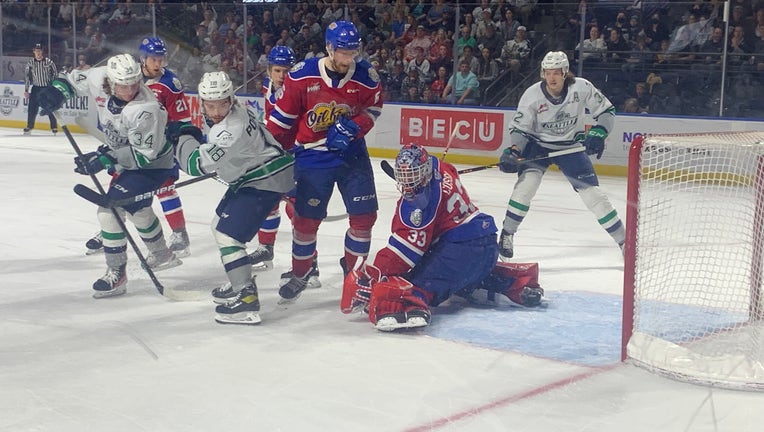 Edmonton Oil Kings goaltender Sebastian Cossa (No. 33) makes a glove save behind Conner Roulette (No. 34) and Sam Popowich (No. 18) of the Seattle Thunderbirds in Game 4 of the WHL Championship Series at accesso ShoWare Center in Kent, Wash. on June (photo by Curtis Crabtree / FOX 13 Seattle)

KENT, Wash. - A slap shot from Logan Dowhaniuk beat Thomas Milic with 4.7 seconds left to play to stun the Seattle Thunderbirds in a 3-2 loss to the Edmonton Oil Kings in Game 4 of the WHL Championship Series on Wednesday night.

An icing call gave Edmonton a face-off in the Seattle zone with 28.7 seconds left to play. The draw was won by Jakub Demek and the Thunderbirds couldn't find a way to clear the zone. A shot from the wing on net from Josh Williams was blocked into the air by Milic out to the top of the circles. Dowhaniuk quickly fired the puck on net as it beat Milic for a critical blow to Seattle's chances in the series.

"It just popped out to me there and I just honestly just shot it," Dowhaniuk said. "Didn't really pick a spot or anything, just put it on net and it went in. ... Right before I got out there, our assistant coach is telling us like 30 seconds left, like be smart. And I get a chance like that and I put it in."

The victory for Edmonton gives them a 3-1 lead in the series with the rest of the games headed back to Canada.

The Thunderbirds had a power play chance with 2:40 left to play after a tripping penalty on Justin Sourdif. Despite a few good looks on net, Seattle couldn't find the go-ahead goal. Dowhaniuk then provided the crushing blow in the closing seconds to take a commanding lead in the series. The shot went through the legs of winger Lucas Ciona and around the screen of Demek in front of Milic to find its way into the net.

"It's a heartbreaker," Seattle center Jared Davidson said. "I think we played pretty well. One of our better games this series but I think we've got more and we just got to learn how to close games out and take it to overtime if we need."

Outside of the first six minutes of the second period, Seattle controlled the run of play throughout most of the contest. For the first time in the series, the Thunderbirds out-shot Edmonton with a 34-23 margin. It was a massive response for Seattle after getting shutout 4-0 by the Oil Kings in Game 3 on Tuesday night.

But the dagger from Dowhaniuk could ultimately be the most critical play of the entire series. Seattle was five seconds from forcing overtime with a chance to even the series heading back to Edmonton. Instead, they'll head north of the border with a 3-1 deficit.

"We've been here before," Ciona said. "So we just got to take it one step at a time. One game at a time. We've been down 3-1 in a previous series (against Portland) so we've just got to keep clawing our way back."

A scary collision marred the early stages of the contest. After attempting to deflect a puck out of the air, Oil Kings winger Brendan Kuny got caught with a check from Thunderbirds defenseman Tyrel Bauer. While the hit didn't seem particularly vicious, Kuny seemingly had his head hit the ice as he fell down. The impact left Kuny down on the ice for several minutes as he was attended to by the on-site medical staff.

Kuny was slowly strapped to a backboard and then placed on a stretcher to leave the ice for Edmonton to a standing ovation from the crowd.

Oilers head coach Brad Lauer said the Kuny is doing OK and is set to re-join the team before they return to Edmonton.

"I think he was released," Lauer said. "I haven't heard exactly where he is but I guess he was released and he is going to be joining our team here tonight."

Bauer was tossed the contest on a game misconduct penalty that gave the Oil Kings a five-minute power play chance.

"(The officials) said they had no choice because the player was injured," Thunderbirds head coach Matt O'Dette said. "I thought it was incidental contact. You know, kind of two guys colliding that maybe didn't see each other. I thought Bauer was heading back to the front of the net to defend. But, you know, obviously you never you will never want to see a player hurt like that. I hope he's OK."

The Thunderbirds' penalty kill came up massive over the five-minute stretch with no more than two shots getting on net against Milic over the span. It took three-and-a-half minutes for Edmonton to get their first shot on net during the power play, which was easily saved by Milic. With just eight seconds left in the Bauer penalty, Reid Schaefer picked up a boarding penalty for a hit against Demek that gave two more minutes of advantage to the Oil Kings. That penalty would also expire without damage as the game remained scoreless.

Through three games of the series, neither team had managed to net a goal in the first period of play. Ciona finally changed that for Seattle with 3:57 left in the opening frame. A shot from Jordan Gustafson rebounded off Sebastian Cossa and Ciona out-muscled Dowhaniuk for position in front of the net to chip the puck home for the lead.

Despite the seven-minute penalty kill, the Thunderbirds still carried an 11-5 advantage in shots at the end of the first period.

"It just shows how hard we work that we were dedicated to shutting them down and it showed. They did a great job," Davidson said of the penalty kill effort.

The Oil Kings came out of the gates firing in the second period.

Josh Williams picked up a rebound of a shot from Carson Golder and beat Milic with a backhand shot to tie the game at 1-1 less than four minutes into the period. Just over two minutes later, Williams connected again with a wrist shot after maneuvering in front of the net for a clean look that beat Milic high to his glove side to give the Oil Kings a 2-1 lead.

A penalty for holding on Braeden Wynne for Edmonton gave Seattle a power play chance with 7:19 left in the period. It took just 12 seconds as Jared Davidson managed to maneuver in to the left circle and had a wrist shot beat Cossa between his legs with Matthew Rempe serving as traffic in front of the net to tie the game at 2-2.

Cossa, a first-round pick of the Detroit Red Wings last year, finished with 32 saves on 34 shots for Edmonton.

"I thought we played a good hockey game," O'Dette said. "We needed to respond after last night, play a better game. I thought we did that. Cleaned up a lot of areas that we needed to clean up. Obviously, it's a heartbreaker. No other way to say it. That's a heartbreaking ending. We have no time to dwell on it. We have to be able to regroup and get ready for the next game."

The final three games of the series, if all are necessary, will be played at Rogers Place in Edmonton due to building conflicts for Seattle at accesso ShoWare Center. 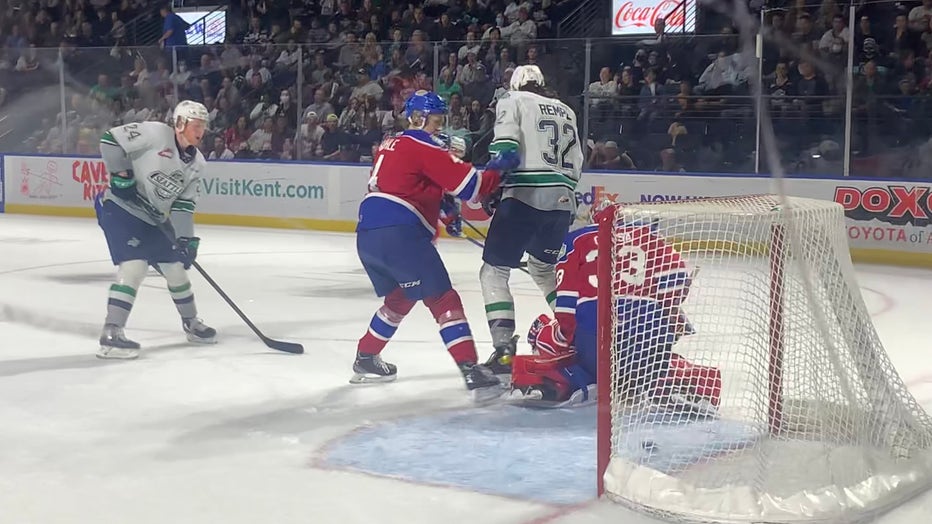 A shot from Jared Davidson (No. 29) of the Seattle Thunderbirds slides between the legs of Edmonton Oil Kings goaltender Sebastian Cossa (No. 33) as Matthew Rempe (No. 32) provides traffic in front of the net for the tying goal in Game 4 of the WHL C (photo by Curtis Crabtree / FOX 13 Seattle)