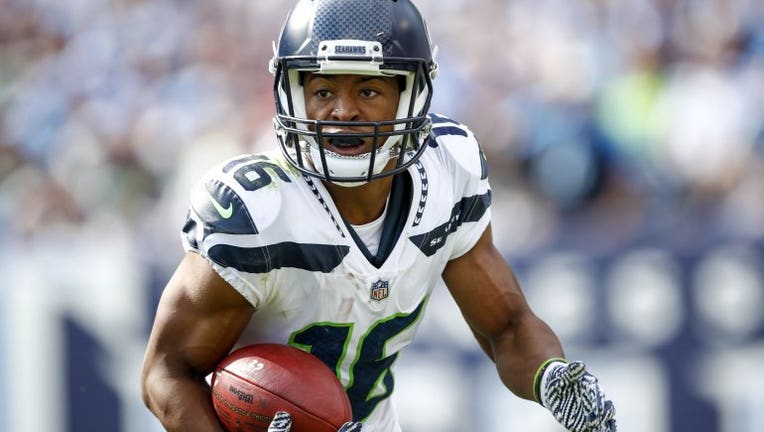 Wide Receiver Tyler Lockett #16 of the Seattle Seahawks carries the ball against the Tennessee Titans at Nissan Stadium on September 24, 2017 in Nashville, Tennessee. (Photo by Wesley Hitt/Getty Images)

SEATTLE - Tyler Lockett probably only needs one, maybe two catches Sunday to reach a new career-high for yards receiving in a single season.

After dealing with COVID-19, Lockett will have a greater appreciation for the accomplishment.

"I’m just thankful for more so each day that I get it, how can I make the best out of it," Lockett said Thursday. "And the fact that I do have a chance to be able to have the most yards that I’ve ever had in my career history, that’s even a blessing on its own. And that’s something that if it does happen that I will be thankful for."

Lockett returned from the reserve/COVID-19 list last week in time for Sunday’s 25-24 loss to Chicago. But he wasn’t close to being back at full strength yet after a rough stretch dealing with the virus.

Lockett said he had symptoms for nearly a week before he started feeling better and lost eight pounds during the stretch. When Lockett got back on the field against the Bears, he said he was still feeling fatigued.

"It was a pretty big accomplishment just to get back onto the field last week. I mean, I was just tired and exhausted," Lockett said.

Lockett practiced on Dec. 15 and had tested negative that morning despite feeling like he had a small cold. That night, he said he started experiencing chills. He tested positive the next day. His symptoms included feeling exhausted, sore throat, chest pain, vomiting and anxiety.

Lockett, who is vaccinated, said he had planned to get a booster shot about 10 days before he tested positive but had a conflict that caused him to delay getting it. He missed Seattle’s loss to the Rams on Dec. 21 that ended any realistic chances the Seahawks had of making the postseason.

"It was just very unfortunate," Lockett said. "I was out for a whole week. We had a big game versus the Rams that kind of determined whether we could go to the playoffs or not. I couldn’t play, so I had to sit there and watch as well as get tested positive every single day."

Lockett said the new COVID-19 protocols the NFL has adopted that allow a player to return as early as five days after testing positive would not have applied to him because he was still dealing with symptoms after five days.

He said one of the toughest aspects was the mental grind of testing positive day after day. Lockett finally tested negative a week after his first positive.

"You’re starting off your day seeing three positive tests. That’s the hard part, is every day you’re building yourself up only to start back over the next day in the same boat of like, ‘Am I ever gonna get through this?’" Lockett said.

Lockett managed to play 48 snaps and had three receptions for 30 yards last week against the Bears. He’ll begin Sunday with 1,053 yards receiving on the season, right on the heels of his career-high 1,057 yards set two years ago.

NOTES: Seattle placed starting LG Damien Lewis on the reserve/COVID-19 list on Thursday, making it likely that Kyle Fuller or Phil Haynes will start at the position against the Lions. Seattle has three players currently on the virus list: Lewis, DE L.J. Collier and CB Bless Austin.