Chuck Knox, the former NFL coach who took the Los Angeles Rams to three straight NFC championship games and also led the Seattle Seahawks and Buffalo Bills, has died. He was 86.

"He established a winning culture and a legacy that will never be forgotten, being the only coach to lead the Rams to five consecutive double-digit-win seasons," the Rams said in a statement. "The memories and accomplishments that Coach Knox left behind will continue to inspire us and Rams fans. We hold his family in our thoughts and prayers during this difficult time."

Former Seahawk Dave Wyman on the legacy of Chuck Knox

Former Seahawk Dave Wyman on the legacy of Chuck Knox

Called "Ground Chuck," for his run-first offenses, Knox was the NFL coach of the year in 1973, 1980 and 1984, winning the award with all three teams he coached. He went 186-147-1 during 22 seasons as an NFL head coach, including two stints with the Rams. He won five straight NFC West titles from 1973-77, and he returned in 1992 for the franchise's final three seasons in Los Angeles before its move to St. Louis.

Hall of Fame defensive end Jack Youngblood posted a picture on Twitter thanking Knox for his trust and "allowing us to make our way to Canton."

"Chuck Knox was one of the most influential men in the early days of my career," Youngblood wrote. "Great coach and an even better man."

Knox left the Rams in 1978 for the Buffalo Bills. After five seasons, he took over the Seahawks in 1983 and immediately led the franchise to its first playoff berth and the AFC title game. He spent nine seasons with Seattle.

"His presence projected an external toughness, but merited instantaneous respect by the genuine care and concern he held for his players," the Seahawks said in a statement. "He was one of the great influencers not only in football, but in life." 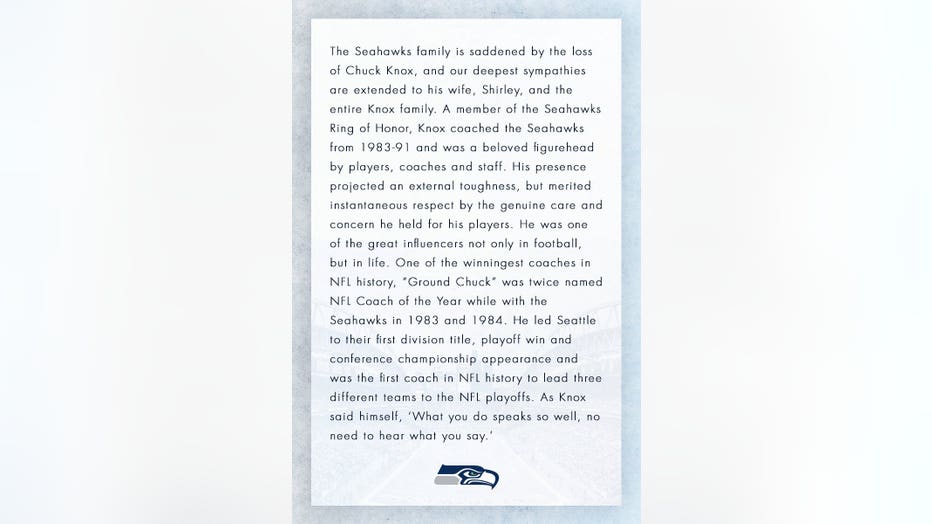 Knox is the only coach to be enshrined in the Seahawks "Ring of Honor." He was revered in Seattle for turning the young franchise into a contender in the AFC West for most of his tenure.

Current Seattle coach Pete Carroll tweeted Sunday that Knox was, "A true Seahawks legend and a man who had a great impact on so many."

Knox was a two-way tackle at Juniata College in his native Pennsylvania, serving as a captain on the school's undefeated 1953 team. He began his coaching career as an assistant at Juniata. He was a high school assistant at Tyrone and then head coach at Ellwood City before moving on to Wake Forest and Kentucky.

Knox considered at one-time returning to Juniata as a history professor and was working on a master's degree at Penn State before deciding coaching was where he should be.

"During that time, I thought what I really wanted to do was coach and not go into the academic area," Knox told the AP in a 2005 interview. "I know I made the right choice. It's what I wanted to do."