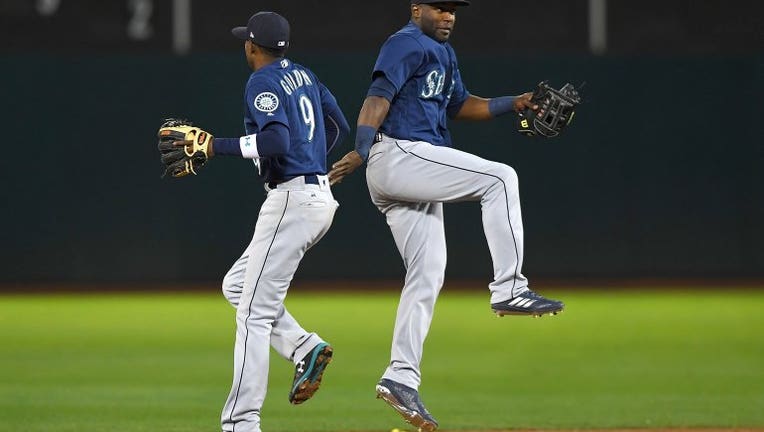 Robinson Cano had two hits and an RBI after being dropped down a spot in the batting order after second baseman Jean Segura was scratched. Dee Gordon and Ryon Healy added two hits apiece.

Seattle had lost three straight and five of seven before taking the opener of this four-game series. The Mariners pulled within 4 1/2 games of the A's for the second AL wild card. Oakland remains 2 1/2 back of Houston for first place in the AL West.

Jed Lowrie had an RBI single for the A's.

LeBlanc (8-3) allowed three hits and three walks with four strikeouts. He retired 12 of his final 13 batters to win for the second time in his last seven starts.

Adam Warren and Nick Vincent retired three batters each to complete the four-hitter.

Haniger homered off Frankie Montas (5-4) with one out in the fourth. He also singled leading off the game, extending his season-high hitting streak to 11 games. Haniger went into the day leading the AL with 38 hits this month.

The Mariners scored five runs with two outs and took advantage of a throwing error by third baseman Matt Chapman in the first inning.

Cano doubled and scored on Healy's single before Ben Gamel drew a bases-loaded walk to make it 2-0. Two more runs scored on Chapman's error. Gordon added an infield single to drive in Gamel.

After Denard Span tripled to open the second, Cano singled to push the lead to 6-0.

It was a disappointing start to Oakland's 10-game homestand following a troubling start to the week when the A's dropped two of three to Houston and placed two starting pitchers on the disabled list — Sean Manaea and Brett Anderson.

Mariners: Segura was a late scratch, one day after being forced out of of the game in San Diego when he fouled a ball off his shin.

Athletics: Anderson has been diagnosed with ulnar nerve irritation in his left arm.