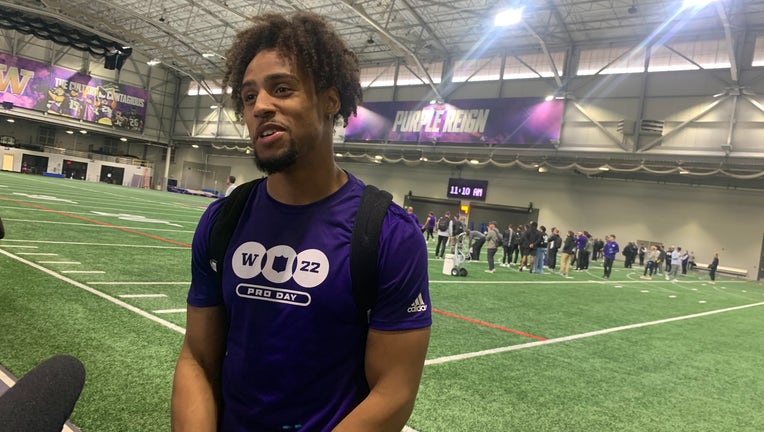 University of Washington cornerback Kyler Gordon speaks with reporters after doing workouts in front of NFL scouts at UW's Pro Day on March 29, 2022.

SEATTLE - Trent McDuffie and Kyler Gordon were among a handful of Washington Huskies to take part in pro day workouts in front of NFL scouts on Tuesday.

The standout cornerbacks are both projected as potential first-round picks in next month's NFL Draft. Both players took part in only limited drills during the workouts.

McDuffie only participated in the vertical and broad jumps, and the bench press during the workouts. He did not run the 40-yard dash again after clocking in with a 4.4 run at the NFL Combine last month.

"I just needed to put some numbers out there," McDuffie said. "I've been working this whole past two months, haven't seen any times, no numbers, kind of just grinding, grinding. And so today was kind of just like the first time I was like 'OK, I see where my work has gone, where it started, and where it's at now.' So it was a nice feeling just getting it done and over with."

McDuffie had a 38.5-inch vertical leap, which would have been a top 20 effort at the combine.

Gordon did a few more drills than McDuffie, including on-field position drills. Gordon had a 39.5-inch vertical leap, which would have tied for 10th at the combine.

"I'm not going to lie, I was hoping for more," Gordon said. "I've definitely jumped higher before. It is what it is. I know there's something still left in the tank, for sure. I'm not too sad about it."

Both Gordon and McDuffie are possible first-round picks with McDuffie generally graded slightly higher among draft analysts. Daniel Jeremiah of The NFL Network has McDuffie as his 13th-ranked prospect while Gordon is 22nd.

Conner had 42 catches for 735 yards and four touchdowns last season at Idaho State.

"Those numbers are fantastic," Conner said. "I feel like I did well performing in front of other guys that are going to go high in the draft."