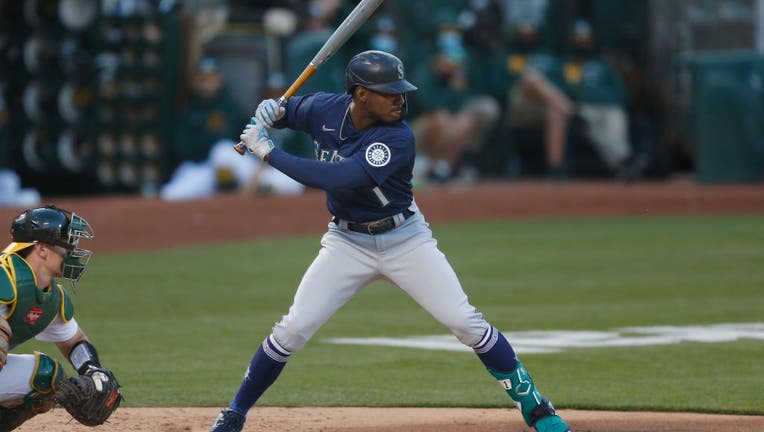 OAKLAND, CALIFORNIA - MAY 24: Kyle Lewis #1 of the Seattle Mariners at bat against the Oakland Athletics at RingCentral Coliseum on May 24, 2021 in Oakland, California. (Photo by Lachlan Cunningham/Getty Images)

SEATTLE - Former American League Rookie of the Year Kyle Lewis is set to rejoin the Seattle Mariners after completing a 20-day rehab stint with the Tacoma Rainiers.

Lewis, 26, hasn't played in nearly a year after a knee injury last May ended his 2021 season after just 36 games. Lewis sustained a torn meniscus in his right knee as he landed awkwardly trying to make a catch in a game against the Oakland Athletics.

While the team didn't fully commit to Lewis being activated, he was on his way back to join the team in Seattle on Monday. The Rainiers had completed a road trip to face the Sacramento River Cats on Sunday.

"He's in transit today," Mariners manager Scott Servais said. "A chance to see how he's feeling. Hopefully we can maybe add him to our roster. That probably wouldn't happen till tomorrow. But that's what we're looking at when he gets in here today and see how he's doing, where he's at."

Lewis' knee has been an ongoing area of concern since he sustained a significant injury in 2016 with the Everett Aqua Sox. It led to a follow-up surgery in 2018 as well due to ongoing discomfort. Lewis then sustained a bone bruise at the end of spring training last year that kept him out for the first 17 games of the year.

Lewis has been playing almost exclusively as a designated hitter in his rehab stint with the Rainiers. He's batting .314 with three home runs, 12 RBI, six stikeouts and five walks in 10 games played with Tacoma.

"It doesn’t mean we won’t get him in the outfield at some point, but where we’re at right now and his anxiousness to get back and be a contributor here, we thought it would be best to try to get him to fill the DH spot as quickly as we could," Servais said.

The Mariners hope would be that Lewis can provide some offensive pop to a lineup that has been significantly struggling outside the top four of Adam Frazier, Ty France, J.P. Crawford and Julio Rodriguez.

"Any time you can get a player back that can change the lineup and impact the game the way he can, it’s a huge shot in the arm," Servais said. "He hasn’t played in the big leagues in a while, it has been almost a year, so you don’t know what you’re going to get, but I hope he comes back smoking hot."