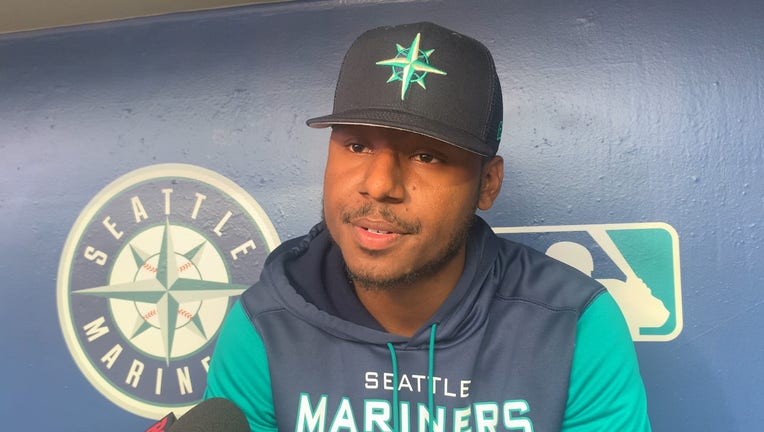 Mariners outfielder Kyle Lewis speaks with reporters ahead of his return to the lineup against the Oakland A's on May 24, 2022 at T-Mobile Park. (photo by Curtis Crabtree / FOX 13 Seattle)

SEATTLE - It was in a game nearly a full year ago against the Oakland Athletics and starter James Kaprielian that 2020 American League Rookie of the Year Kyle Lewis injured his knee and kicked off a long rehabilitation process.

With the A's back in town and Kaprielian back on the mound, Lewis makes his return to the Seattle Mariners lineup on Tuesday night. Lewis is in the lineup as a designated hitter as the Mariners hope his bat can help kickstart at scuffling lineup.

Lewis, 26, was officially activated from the injured list around 90 minutes before first pitch on Tuesday night. Left-handed pitcher Danny Young was optioned to Triple-A Tacoma to make room for Lewis on the roster. Lewis sustained a torn meniscus in his right knee as he landed awkwardly trying to make a catch in a game against the A's on May 31 last year. The injury led to surgery that ended his season and another lengthy recovery.

"Definitely a lot of emotions," Lewis said. "A lot of different things I had to deal with as far as going through the rehab process. Countless hours and time trying to problem-solve and come up with different solutions for things. We could go on and on about that. Just being up here today and being able to hit BP, take everything in stride, every moment is special."

Lewis' knee has been an ongoing area of concern since he sustained a significant injury in 2016 with the Everett Aqua Sox. It led to a follow-up surgery in 2018 as well due to ongoing discomfort. Lewis then sustained a bone bruise at the end of spring training last year that kept him out for the first 17 games of the year.

"There's been a lot of steps to it. A lot of different ups and downs and dark times. A lot of moments, highs and lows," Lewis said. Just kind of a weird full circle moment to be facing the same team and the same pitcher. There's a lot to it, a lot of emotions going into that.

"I've always tried to have that mindset of just enjoy the journey and embracing the journey but it really was a big test of that going through this so this is definitely pretty cool."

"There will be a lot of right up until game-time type decisions going forward, I think, in the early going until he gets into a good routine," Servais said. "See how he's feeling, how he's bouncing back, how he's responding the next day and what not."