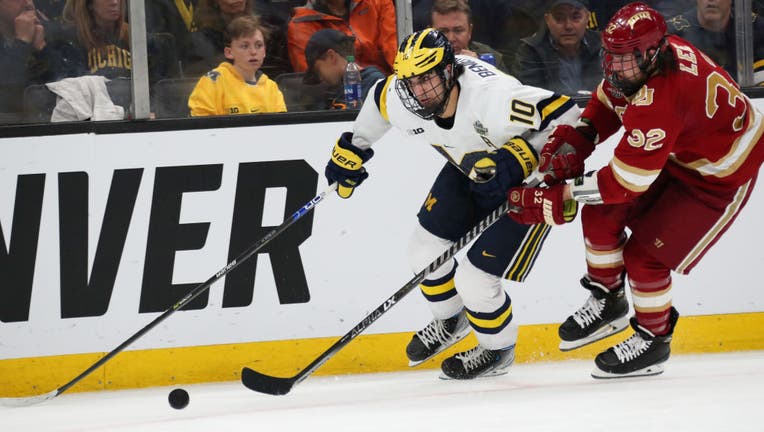 BOSTON, MA - APRIL 07: Matty Beniers #10 of the Michigan Wolverines and Justin Lee #32 of the Denver Pioneers chase after the puck in the second period of the Division I Mens Ice Hockey Semifinals at the TD Garden on April 07, 2022 in Boston, Massach

With the elimination of the Michigan Wolverines by the Denver Pioneers in the Frozen Four on Thursday, the countdown is seemingly on toward top draft pick Matty Beniers making his debut with the Seattle Kraken.

Beniers was the Kraken's first ever entry-level draft selection last July. He'll almost certainly be the first draft pick to appear in an NHL game for the Kraken when he makes his debut with the team. With Michigan's 3-2 overtime loss to Denver, that debut could be coming in short order.

Beniers still needs to sign a professional contract in order to begin play in the NHL. Emily Kaplan of ESPN.com reported "there's a 90 percent chance" Beniers will sign with the Kraken with his season now over.

Kraken general manager Ron Francis said last month that it's likely they would get Beniers signed and into games before the end of the season.

"Usually with higher picks the agent and the player want you to, in essence, burn the year," Francis said of Beniers' entry-level contract. "So in theory, you know, if at the end of his season with Michigan, and if he wanted to come out, that's the deal we would most likely look to do is to try and sign him and burn a year, which would get him into our lineup."

The Kraken maintain Beniers' rights through the entirety of his college career. If Beniers elected to spend another season in college, he could do so with the Kraken continuing to hold his professional rights.

However, Beniers appears ready to make the jump and said ahead of the Big Ten Tournament he felt able to play in the NHL.

"I think, going to the Olympics and playing there was good for me and to see where I'm at," Beniers said. "I think I can be good. I think, honestly, you never really know, but I think that whatever happens, you know, I think I'll make it work. … "I think with my speed and skill and work ethic I think I should be fine."

Beniers finishes his season at Michigan with 43 points (20 goals, 23 assists) in 37 games played. He was a top 10 finalist for the Hobey Baker Award, given to the best player in college hockey this season.

The Wolverines have seven players on their roster that were drafted last summer, including four of the top five picks in the draft. All of them could begin their pro careers in short order.

It may be too short a turnaround to expect Beniers to join the team ahead of Saturday's home game against the Calgary Flames. Beniers and the Wolverines would have been expected to face either Minnesota or Minnesota State-Mankato in the national championship game that night instead.

The Kraken play at Calgary on Tuesday, at Winnipeg on Wednesday and then return home to face the New Jersey Devils next Saturday, April 16. Assuming Beniers does indeed sign with the team, he could debut in any of those games over the next week.

Nothing is guaranteed with Beniers. He could elect to stay in school another year or just wait to sign his contract a little longer. But it wouldn't be a surprise to see Beniers playing for the Kraken very soon.