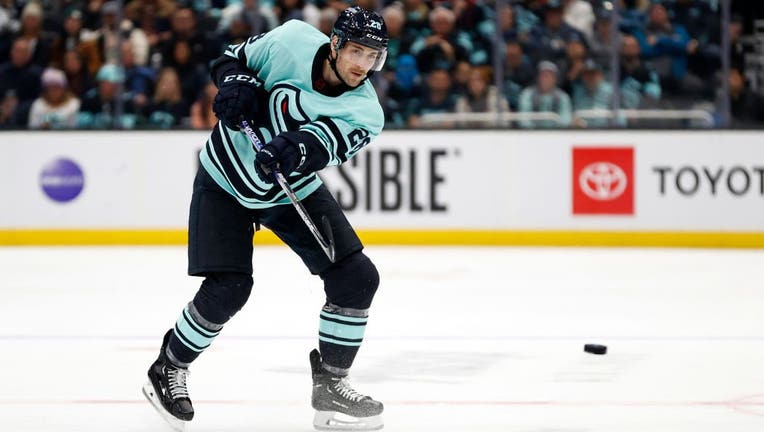 SEATTLE, WASHINGTON - NOVEMBER 13: Carson Soucy #28 of the Seattle Kraken skates against the Winnipeg Jets during the second period at Climate Pledge Arena on November 13, 2022 in Seattle, Washington. (Photo by Steph Chambers/Getty Images)

Seattle Kraken defenseman Carson Soucy was fined $2,500 by the NHL for a roughing penalty against forward Pierre-Luc Dubois in the closing minute of regulation of Sunday night's 3-2 overtime loss to the Winnipeg Jets.

Soucy was jostling with Dubois for much of the final minute. Soucy cross-checked Dubois in the back with 45 seconds left. Dubois returned the favor 10 seconds later. Soucy slashed the back of Dubois' skate and Dubois, again, responded in kind. But then when Dubois gave Soucy one last hip check fighting for position, Soucy punched Dubois in the back of the helmet to draw the penalty.

The infraction – the eighth penalty of the night for Seattle – gave the Jets a six-on-four chance for the final 25 seconds and Blake Wheeler scored the tying goal with 3.9 seconds left to play. Mark Scheifele would then score the game-winning goal less than a minute into overtime for Winnipeg.

"We just need to close that game out. We don't need to settle any scores at that point in time," a frustrated head coach Dave Hakstol said after the game.

The penalty cost the Kraken an extra point in the standings and allowed the Jets to steal two points with the victory. Both the Jets and Kraken are in strong early position for the playoff chase and every point is precious at the end of the regular season.

"Those are the (games) that really sting. You never know what point is going to get you into the playoffs and when you make mistakes and keep giving good teams like that opportunities, that's what's going to happen."

The money from the fine is donated to the NHL Players’ Emergency Assistance Fund.