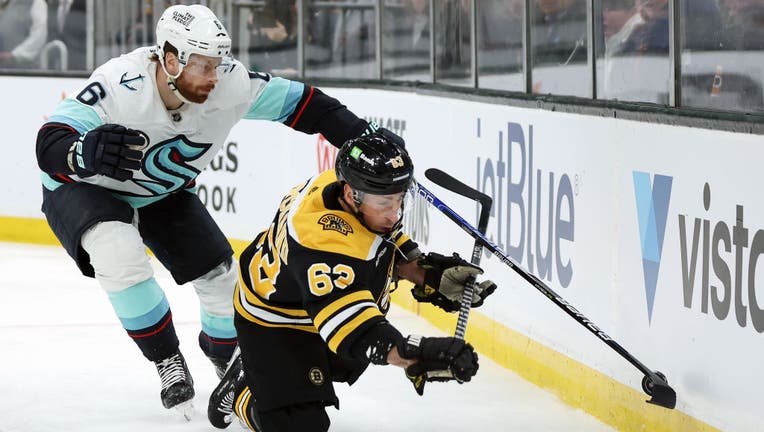 BOSTON, MASSACHUSETTS - JANUARY 12: Brad Marchand #63 of the Boston Bruins and Adam Larsson #6 of the Seattle Kraken battle for control of the puck during the first period at TD Garden on January 12, 2023 in Boston, Massachusetts. (Photo by Maddie Me

It's time to start taking the Seattle Kraken very seriously.

The Kraken put an exclamation point on a brilliant first half of the season with a convincing 3-0 victory over the best team in the NHL in the Boston Bruins on Thursday night.

Brandon Tanev, Eeli Tolvanen and Jaden Schwartz scored for Seattle while Martin Jones delivered 27 saves in the victory over the Bruins. The Kraken have won seven straight games with the last six all coming on the road.

It was the second straight shutout effort for Jones, who also blanked the Montreal Canadiens in a 4-0 win on Monday night.

"Honestly, I thought that was probably our most complete game of the season," Jones told reporters. "To come in and play how we did and come out with a win in this building, that's a big step forward for us."

It was the first loss in regulation the Bruins have had at home all year as they'd entered the night at 19-0-3 on the season. Boston is 32-5-4 on the year (68 points), which is nine points clear of the Toronto Maple Leafs for best in the league.

With the Bruins' victory in the bag, the Kraken now are at the halfway mark of their season. They are 25-12-4 through the first 41 games of the season, which gives them 54 points on the year. Seattle managed just 60 points for the entire season last year. The Kraken are now right on the heels of the Dallas Stars and Vegas Golden Knights (56 points each) for the best mark in the Western Conference.

"We got an early lead. We weathered some great chances from them and our goaltender played incredible," Tanev said. "Jonesy was awesome for us tonight. Some great, big blocks by our group down the stretch and everyone committing to playing the right way."

Tanev delivered a hard forecheck on Brandon Carlo that sent the puck around the end boards by defenseman Hampus Lindholm. Daniel Spong chased down the loose puck and fired it toward the net where Tanev redirected the puck between the post and goaltender Linus Ullmark to give the Kraken a 1-0 lead.

The Kraken managed to kill off a power play chance late in the first period to maintain their lead into the intermission.

Jones denied Bruins leading scorer David Pastrnak on a breakaway chance early in the second period to preserve the advantage. Ullmark then delivered a big save for Boston on a deflected shot from Oliver Bjorkstrand on the power play for Seattle.

Trent Frederic and Taylor Hall both had chances in front of the net as Jones sprawled to keep the puck out of the net. Ullmark then stopped a breakaway chance from Jordan Eberle as the goaltending continued to shine both ways.

Seattle then broke through to extend the lead. Tolvanen corralled a loose puck off a blocked Bjorkstrand shot, spun and fired a wrist shot by Ullmark to make it a 2-0 Kraken lead.

Tolvanen now has four goals and six points in seven games played for Seattle since being claimed off waivers from the Nashville Predators last month.

The Kraken blocked 19 shots on the night and stayed out of the penalty box outside of one Justin Schultz tripping call.

Boston pulled Ullmark with five minutes left to play and Boston swarmed the Seattle defense. Jones was peppered with shots as the Kraken made several key blocks and saves to keep the Bruins off the board. Pastrnak missed a mostly open net as well as the Kraken couldn't clear the defensive zone for over two minutes.

"We blocked shots, we picked up sticks, we cleared pucks out. That was probably the biggest thing is we were really, really strong in front of our net tonight," Jones said.

Schwartz managed to find an empty net goal with 1:50 left to play from out of their own defensive zone to seal the victory for Seattle.

"We played a really good road game tonight. It's a tough place to win, obviously," head coach Dave Hakstol said. "We've been able to do that this year. Our guys should be proud of that. We did all the little things that you have to do to win. We scored a couple timely goals. We had really good goaltending. For long stretches of the game we managed the puck really, really well. And for a night where we got beat up pretty good in the face-off dot, we checked really well all night long."

Seattle heads for last road game on this franchise-long seven-game trip against the Chicago Blackhawks on Saturday. Chicago is the worst team in the NHL with just a 10-25-4 record. However, one of their 10 wins came against the Kraken in October as Seattle couldn't hold a 2-0 or 4-3 lead in a 5-4 loss.