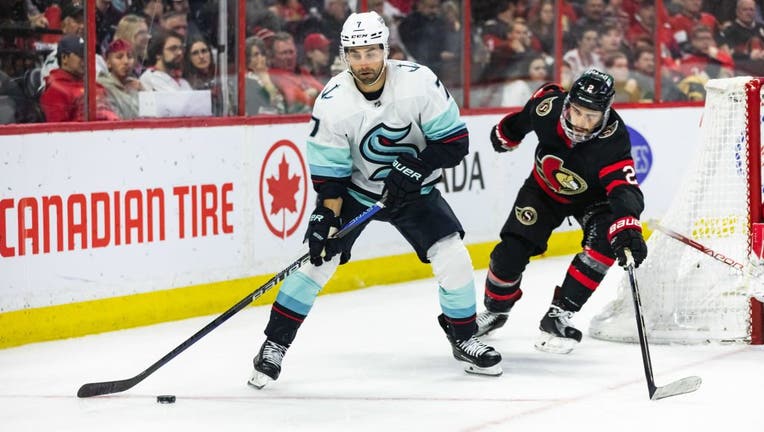 OTTAWA, Ontario - Jordan Eberle and Andre Burakovsky led the way with a goal and two assists each for the Kraken, who picked up their fourth consecutive win as they defeated the Senators 8-4 on Saturday night.

Seattle got goals from eight different players and 13 had at least one point.

Justin Schultz, Matty Beniers, Vince Dunn and Daniel Sprong had a goal and an assist each. Jared McCann and Oliver Bjorkstrand also scored for Seattle.

Martin Jones made 19 saves for his 18th win of the NHL season.

"I think the strength of this group is in the depth that we have. And that’s not just the forwards — it’s the defense, it’s the goalies. You see teams that have four lines and six (defensemen) who can contribute and that’s dangerous," said Eberle.

"In my opinion, a lot of the teams that make the playoffs, it’s because of that (depth)."

The Senators (18-18-3) got three goals from Tim Stutzle and another from Brady Tkachuk.

Anton Forsberg started in goal for the Senators but was pulled in favor of Cam Talbot 15 minutes into the game after allowing three goals on five shots. Talbot turned aside 14 of 19 shots.

"There’s no excuses on my end. It was a tough night for both of us. We’ll both take the heat on this one," Talbot said.

"You score four goals in a hockey game you should be able to make the rest of the saves to win the game."

The Kraken led 5-3 to start the third but quickly made that a 7-3 lead on goals by Dunn and Eberle in the opening five minutes. Stutzle completed his hat trick at 5:20 of the period to pull the Senators to within three goals, but Burakovsky scored midway through the period for an 8-4 lead.

"We’ve been at our best when we’ve been able to roll four lines and not have a huge concern over each matchup. That’s the way our team is built," Kraken coach Dave Hakstol said.

"We’re asking everyone to contribute, play the right way, play with responsibility defensively. We weren’t airtight there tonight, but we were good enough at the right times."

Saturday’s game was the first of the season between the Senators and Kraken. They will meet again at the Climate Pledge Arena in Seattle on March 9. … The lone scratches in the game Saturday were Kraken defenseman Cale Fleury and forward Ryan Donato. … Stutzle extended his point streak to seven games.

Kraken: At Montreal on Monday night in the fourth of a seven-game trip.

Senators: Host Nashville on Monday night to wrap up a four-game homestand.