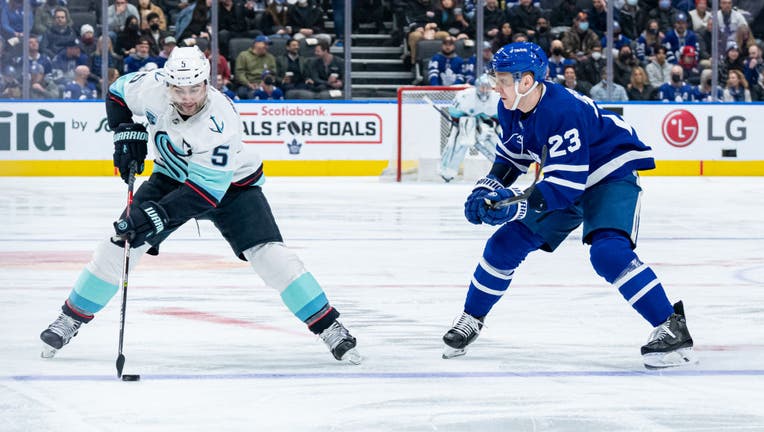 "We want to thank Mark for his time with the Kraken," general manager Ron Francis said in a statement. "As the organization's first captain, he made an immediate and lasting impact both on and off the ice.

"We appreciate the energy, passion and hard work that Colin brought to the rink every day and we wish him and Mark the best in Toronto."

Giordano, 38, is a Toronto native and will now get the chance to play in his hometown. He was on the last year of his contract and will be a free agent after the season. The Kraken held him out of their last two games against the Tampa Bay Lightning and Detroit Red Wings as trade discussions continued.

The Kraken are tied with the Arizona Coyotes for the second-worst record in the league with just 44 points through 63 games. Only the 43 points of the Montreal Canadians is worse. Giordano wants to play for a winning team and Seattle isn't that this season. Nevertheless, he said Friday he enjoyed being a part of the expansion efforts in Seattle after 15 years with the Calgary Flames.

"I'm happy to be a part of something, like building something here," Giordano said. "To be named captain is something I don't take for granted and for the organization to put the 'C' on my jersey this year means a lot. I look at a lot of relationships I made this year, the guys I had never met before. So it's been a pretty cool experience. I know, obviously, we didn't get the results we would have wanted, but I do think there are a lot of positives to take away from the way this thing was built and is being built."

Giordano has 23 points (six goals, 17 assists) in 55 games played for Seattle this season. After an uneven start to the year that was exacerbated by a 10-day stint on the COVID-19 list, Giordano has really played well in recent months. He's scored 15 points in his last 30 games played with three goals over that span, two of which were short-handed.

Seattle Kraken defenseman and team captain Mark Giordano will not play against the Detroit Red Wings on Saturday as the team continues to hold him out of games ahead of Monday's NHL trade deadline.

Blackwell, 28, has eight goals and nine assists in 39 games played for the Kraken this season. Blackwell was coming off a career-high 22 points (12 goals, 10 assists) last year with the New York Rangers when Seattle selected him in the expansion draft. Blackwell provides great energy as a bottom-six forward.

The Maple Leafs had to swing another trade to be able to bring Giordano and Blackwell to Toronto. They dealt defenseman Travis Dermott to the Vancouver Canucks for a third-round draft pick to help free up salary cap space for the trade with Seattle.

The Giordano/Blackwell trade is the second of the last week for Seattle. They also dealt forward Calle Jarnkrok to the Flames in exchange for a trio of draft picks over the next three seasons.  The Kraken now have 11 selections in the first three rounds of the next two drafts.

The NHL trade deadline comes at 12 p.m. PT on Monday.

The Seattle Kraken have traded forward Calle Jarnkrok to the Calgary Flames in exchange for a trio of draft selections over the next three seasons.