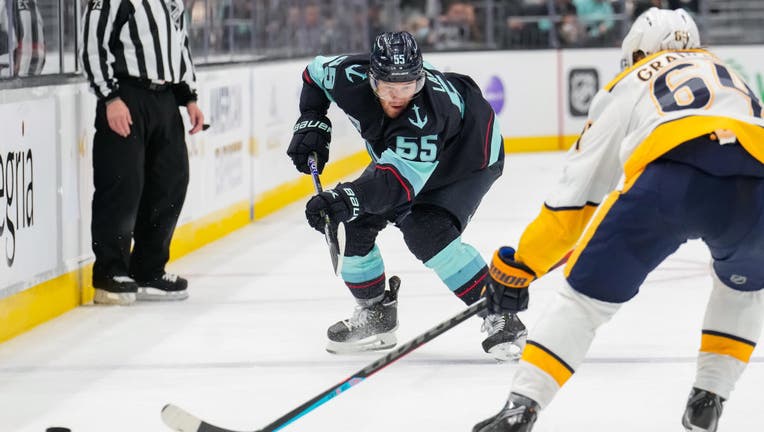 SEATTLE, WASHINGTON - MARCH 02: Jeremy Lauzon #55 of the Seattle Kraken and Mikael Granlund #64 of the Nashville Predators follow the puck during the third period at Climate Pledge Arena on March 02, 2022 in Seattle, Washington. (Photo by Christopher

The Seattle Kraken have traded defenseman Jeremy Lauzon to the Nashville Predators and forward Mason Appleton to the Winnipeg Jets in exchange for draft picks.

Lauzon, 24, appeared in 53 games this season for Seattle after being selected in the NHL expansion draft from the Boston Bruins. Lauzon recorded six points (one goal, five assists) in his role from the blue line.

"Jeremy brought a physical edge to our blue line and we are thankful for his contributions to our team. We wish him well in Nashville," general manager Ron Francis said in a statement.

"Mason brought a hard-working effort to the rink and we want to thank him for his time with the Kraken," Francis said.

The Kraken completed three trades on Sunday alone with defenseman Mark Giordano and forward Colin Blackwell being dealt to the Toronto Maple Leafs in exchange for two second-round picks and a third-round pick. They also dealt forward Calle Jarnkrok to the Calgary Flames last week for a trio of draft picks.

The Kraken now have 32 draft picks in hand over the next three seasons.