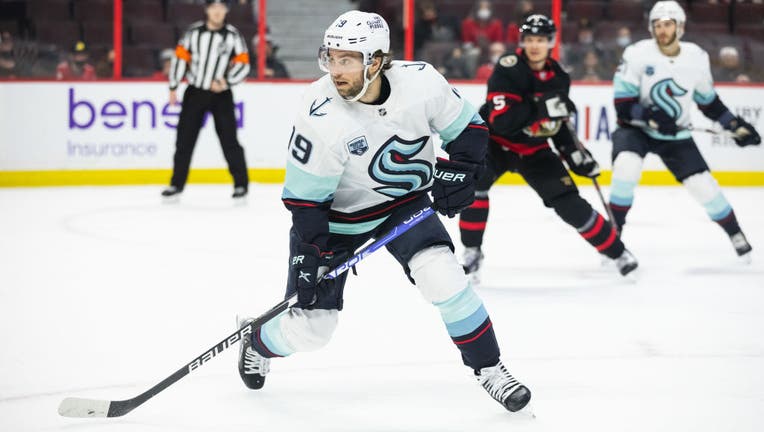 OTTAWA, ON - MARCH 10: Seattle Kraken Winger Calle Jarnkrok (19) in the offensive zone during first period National Hockey League action between the Seattle Kraken and Ottawa Senators on March 10, 2022, at Canadian Tire Centre in Ottawa, ON, Canada.

SEATTLE - The Seattle Kraken have traded forward Calle Jarnkrok to the Calgary Flames in exchange for a trio of draft selections over the next three seasons.

In exchange for Jarnkrok, the Kraken are getting a 2022 second-round pick, a 2023 third-round pick, and a 2024 seventh-round pick. Seattle is also picking up 50 percent of Jarnkrok's remaining salary to facilitate the deal.

"I want to thank Calle for everything he did for the Seattle Kraken and we wish him all the best in Calgary," Kraken general manager Ron Francis said in a statement.

Jarnkrok, 30, was tied for fourth on the Kraken with 26 points with 12 goals and 14 assists. Jarnkrok didn't score his first goal in Seattle until the 13th game of the season as he got off to a slow start offensively. However, he's been much more productive over the last couple of months with 10 goals and 11 assists in his final 30 games played for Seattle.

Jarnkrok was selected by the Kraken from Nashville in the 2021 NHL Expansion Draft.