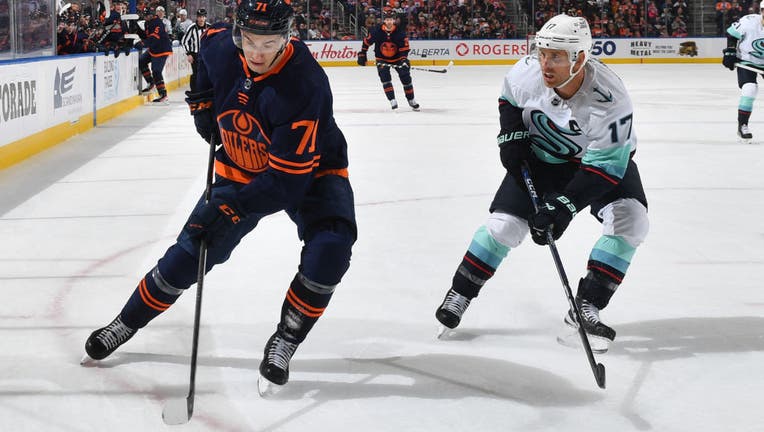 EDMONTON, CANADA - JANUARY 3: Ryan McLeod #71 of the Edmonton Oilers plays the puck during the game against the Seattle Kraken on January 3, 2023 at Rogers Place in Edmonton, Alberta, Canada. (Photo by Andy Devlin/NHLI via Getty Images)

EDMONTON, Alberta - Jaden Schwartz had a goal and two assists as the Seattle Kraken exploded for four consecutive goals in the second period to come away with a 5-2 victory over the Edmonton Oilers on Tuesday night.

Matty Beniers, Yanni Gourde, Jared McCann and Alex Wennberg also scored for the Kraken (20-12-4) who have won two in a row. Martin Jones made 30 saves in the Seattle net.

Ryan Nugent-Hopkins and Connor McDavid responded with goals for the Oilers (20-17-2) who have lost two straight and five consecutive games on home ice.

Edmonton’s lethal power play connected to start the scoring with 7:13 remaining in the opening period as a Leon Draisaitl shot attempt went through the crease to Nugent-Hopkins, who sniped home his 19th of the season from a tough angle past Jones.

Oilers goalie Stuart Skinner kept it a 1-0 game by making a breakaway stop on Daniel Sprong a few minutes later.

The Oilers went up by a pair just 48 seconds into the middle frame as McDavid got his league-leading 33rd goal of the season.

The Kraken tied the game with a pair of goals just 31 seconds apart, however.

Seattle got on the board 4:44 into the second period with a power-play goal as Beniers was able to bat a rebound out of mid-air and it trickled behind Skinner for his 12th.

Then with another Oiler penalty on the way, Beniers made a perfect long pass to Schwartz at the back door, and he directed home his first goal in 12 games and ninth of the year.

The Kraken kept coming against a shaken Oilers squad, as the Edmonton defense failed to clear a big rebound, allowing Gourde to score his first goal in nine outings through traffic with just over seven minutes to play in the second.

Seattle scored its fourth straight goal in the period with 4:12 remaining as Wennberg made a spin pass on to the tape of McCann, who recorded his 17th of the campaign. The goal chased Skinner from the net after allowing four goals on 20 shots, with Jack Campbell coming in to replace him.

Edmonton thought it had clawed back to within a goal on an early third period power-play goal by Draisaitl, but it was erased on a coach’s challenge which determined Zach Hyman was offside on the play.

The Kraken were able to put the game away on an empty net goal by Wennberg with 2:31 remaining. 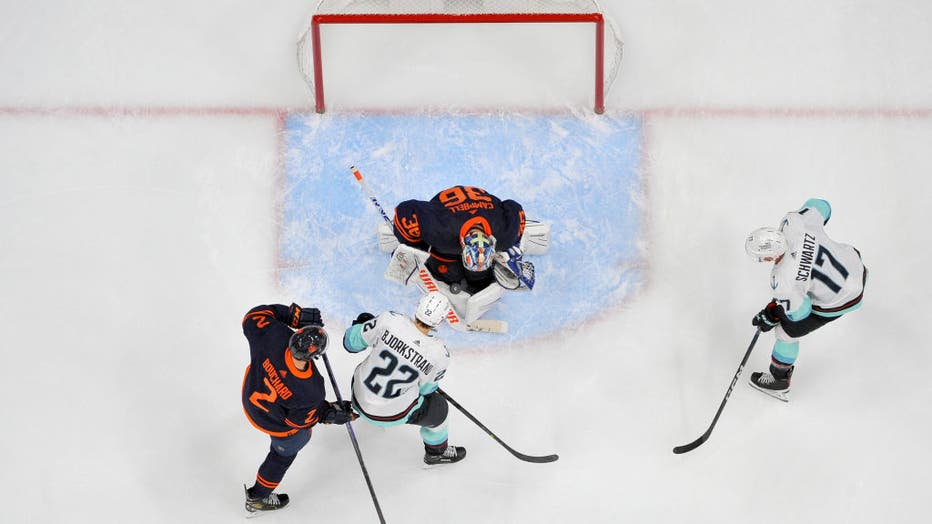 EDMONTON, CANADA - JANUARY 3: Jack Campbell #36 of the Edmonton Oilers makes a save against Oliver Bjorkstrand #22 of the Seattle Kraken during the third period on January 3, 2023 at Rogers Place in Edmonton, Alberta, Canada. (Photo by Andy Devlin/NH

The teams previously met Friday, with Edmonton rolling to a relatively easy 7-2 victory, highlighted by a five-point performance from McDavid. … With eight of their next nine games on the road, the Kraken actually spend more time in Edmonton than in Seattle during that stretch as they will make a stop at home for one game following their seven-game road swing, only to return right back to Edmonton on Jan. 17. … Draisaitl, the league’s second leading scorer behind teammate McDavid, returned to the lineup after missing two games with an oblique strain. Remaining on the mend for the Oilers are Evander Kane (wrist) and Ryan Murray (back). Kane is skating but should still need a month before being available. … Out for the Kraken were Joonas Donskoi (upper body) and Chris Driedger (lower body).

Kraken: At Toronto on Thursday night.