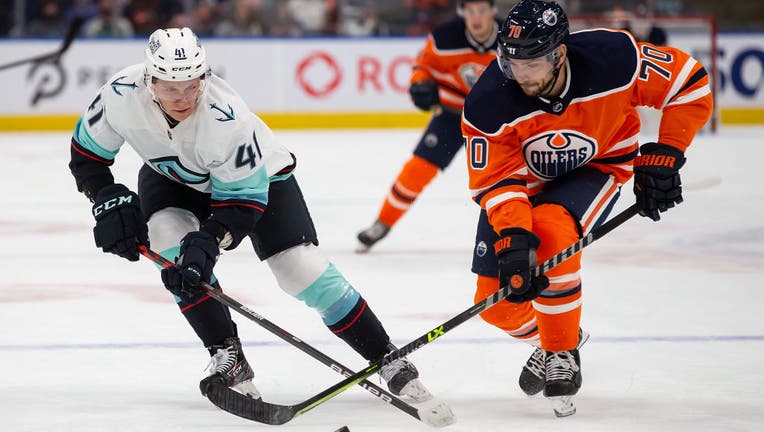 EDMONTON, AB - SEPTEMBER 28: Ryker Evans #41 of the Seattle Kraken skates against Colton Sceviour #70 of the Edmonton Oilers during the second period in a preseason game at Rogers Place on September 28, 2021 in Edmonton, Canada. (Photo by Codie McLac

Evans, 20, was the 35th overall pick of last year's NHL Draft by Seattle. He scored 14 goals with 47 assists in 63 games played this season for the Regina Pats of the Western Hockey League.

"We’re excited to sign our second-ever draft pick, Ryker Evans," Kraken general manager Ron Francis said in a statement. "He had a really impressive season with the Regina Pats and we’re looking forward to having him continue his development with our organization."

Evans is the second entry-level draft pick to sign with the team. Matty Beniers, the team's first ever draft pick, signed with the team earlier this month and has played in four games with the team, scoring two goals and two assists in the process.

But while Beniers joined the Kraken right away, Evans isn't going to immediately join the NHL squad. Instead, he could sign a tryout deal that would allow him to join the Charlotte Checkers for their run in the American Hockey League postseason. The Checkers are Seattle's AHL affiliate this season, sharing the roster with the Florida Panthers, before their own affiliate, the Coachella Valley Firebirds, begins play next year.

For Beniers, joining the Kraken for the final 10 games of the season allows him to have the 2021-22 year count as the first year of his three-year deal. Evans won't be given that same consideration that Beniers was able to get as the No. 2 overall pick.

Evans could make his debut with the Kraken next season. He was invited to training camp with the team last year and appear in preseason games before returning to Regina for the season.

Evans was named a second-team All-Star for the WHL's East Division this year. He led all Regina defenseman in goals, assists and points. He was seventh among all WHL defenseman in points.