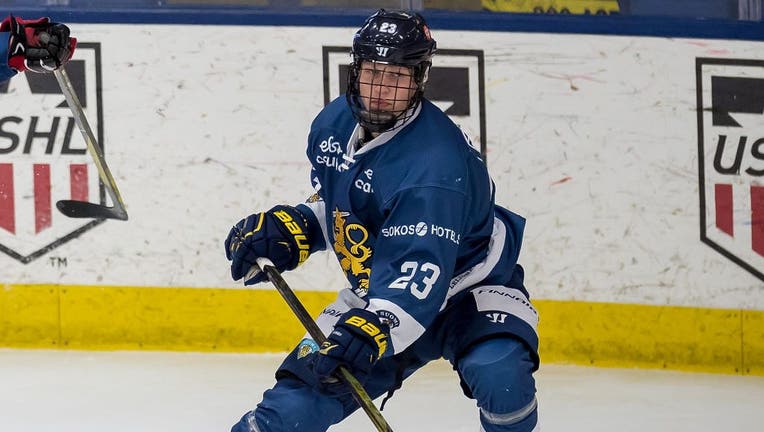 PLYMOUTH, MI - FEBRUARY 14: Ville Petman #23 of the Finland Nationals follows the play against the Russian Nationals during the 2018 Under-18 Five Nations Tournament game at USA Hockey Arena on February 14, 2018 in Plymouth, Michigan. Russia defeated

The Seattle Kraken signed Finnish forward Ville Petman to a two-year contract on Thursday worth just over $1.58 million.

Petman, 22, played last season for SaiPa of Liiga, which is the top professional league in Finland. Petman set career highs with 39 total points on 15 goals and 24 assists in 59 games played for SaiPa. He led the team in goals, assists, points, and power-play goals (7) and was tied for most game-winning goals with three.

"Ville had a good year last season in Finland’s top league and combines offensive and defensive instincts," Kraken G.M. Ron Francis said in a statement. "We like his competitiveness and ability to play with an edge and welcome him to the Kraken organization."

Petman has represented Finland on the world stage multiple times, including the World Junior Championships (2020), the U-18 World Jr. Championships (gold medal, 2018) and the Ivan Hlinka Memorial Tournament (2018).

Petman is expected to attend the Kraken's prospect camp, which is set to take place after the NHL Draft next month. He will also be with the team for training camp in September.

Petman is the second Finnish product the Kraken have signed this offseason. Defenseman Peetro Seppala was signed last month to a two-year contract worth $1.525 million after playing last year for KooKoo of Liiga. He was teammates with Petman on the 2018 U-18 team and 2020 World Juniors team for Finland.

Both Petman and Seppala could end up on the roster of the Coachella Valley Firebirds next year, the Kraken's AHL affiliate that will begin play this season. Seattle shared an AHL team in the Charlotte Checkers with the Florida Panthers last year.