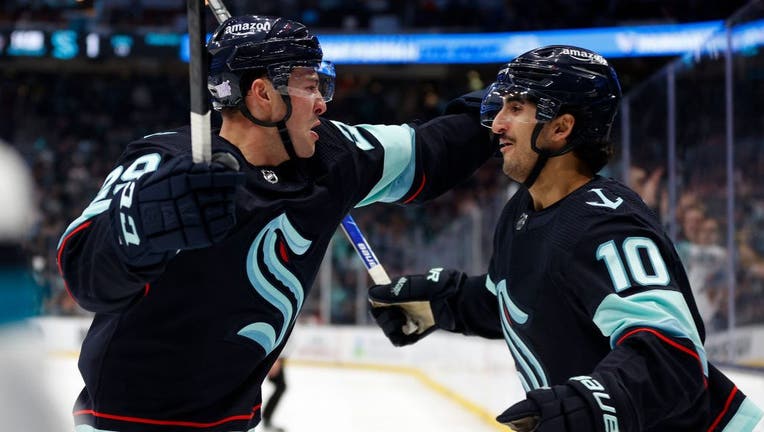 SEATTLE, WASHINGTON - NOVEMBER 23: Vince Dunn #29 of the Seattle Kraken celebrates his goal with Matty Beniers #10 during the second period against the San Jose Sharks at Climate Pledge Arena on November 23, 2022 in Seattle, Washington. (Photo by Ste

SEATTLE - Matty Beniers and André Burakovsky each scored a goal as part of three-point nights and Jaden Schwartz added an empty net goal as part of a two-goal effort as the Seattle Kraken beat the San Jose Sharks 8-5 on Wednesday night.

The Kraken withstood a hat trick effort from Timo Meier to improve to 11-5-3 on the year. The win gives Seattle 25 points and keeps them in third place in the Western Conference.

"Sometimes there's nights like this and it kind of had that feel right from the go," head coach Dave Hakstol said. "There was a lot happening. I look at our goaltender (Martin Jones) and he didn't let in a bad goal tonight and he made some huge saves. I think there was 54 shots, 13 goals, so it was just one of those nights.

The eight goals scored are a new franchise record for the Kraken. They had scored seven goals in a 7-4 win over the Buffalo Sabres last season.

"I think we're really good offensively and you saw that tonight," Beniers said. "I think tonight we really beared down and put our chances away. You know, it's not always like that every night but it's good to see it tonight.

The Kraken's offensive onslaught was necessary to overcome a good effort from the Sharks. In addition to Meier's hat trick, Logan Couture and Alexander Barabanov each scored as well as the Sharks kept pressing Seattle throughout the night. Seattle twice built two-goal leads only to have San Jose get a goal to cut the deficit.

"We need to shut it down a little bit earlier and when we have a two-goal lead we can't really give that up," Burakovsky said. "And I think we did that twice today and that shouldn't happen, but I think It's important to just stick with it just like we did today. We're sticking with it for 60 (minutes_ and find a way to get it back at them."

The Kraken had a bit of a lethargic start to the game. Three first period penalties, two hit posts from Sharks defenseman Erik Karlsson among other strong chances, and a Logan Couture goal on a deflected shot from Nick Cicek gave the Sharks a 1-0 lead.

The Sharks took a too many men penalty of their own and Matt Benning was called for delay of game for firing a puck out of play to give Seattle a 5-on-3 power play chance. It took just nine seconds into the two-man advantage for Burakovsky to beat Kappo Kahkonen with a wrist shot to tie the game at 1-1.

Adam Larsson's hooking penalty late in the period right after matching roughing penalties to Brandon Tanev and Luke Kunin gave the Sharks a 4-on-3 power play chance. Meier's one-timer off a Karlsson pass beat Jones to give the Sharks a 2-1 advantage at the end of the first period.

But Seattle would come to life after the intermission.

Matty Beniers ripped around the right circle and backhanded a pass in front of the net to a crashing Vince Dunn, who beat Kahkonen to tie the game at 2-2.

Just over a minute later, Daniel Sprong delivered a similar pass from behind the net to a waiting Ryan Donato as he beat Kahkonen with a hesitation to give the Kraken a 3-2 advantage.

Jamie Oleksiak – in his first game back after a four-game absence due to a lower body injury – made it three goals in less than five minutes as he redirected a slap pass from Justin Schultz into the net for a 4-2 Kraken lead.

"I felt honesty maybe a little better than I expected," Oleksiak said of his return to the lineup. "You know, a couple defensive reads on the goals against probably wish I could have had back but overall, I was happy with my play."

Meier clawed one back before the end of the period as a stretch pass from Tomáš Hertl led to semi-breakaway look as he beat Jones to make it a 4-3 game.

San Jose would tie it just a minute into the third period as Alexander Barabanov deflected a Benning shot over the shoulder of Jones.

Oliver Bjorkstrand then snapped a 17-game goalless drought with a backhand slip over Kahkonen for his second goal of the season. Bjorkstrand scored in the team's season opener against Anaheim and had gone without until Wednesday night.

"He scored that goal and we all went nuts on the bench," Beniers said of Bjorkstrand. "He's so deserving of it. He's in so many offensive chances every night and now one has gone in and you're probably going to see they're all going to start falling for him."

A 4-on-2 rush for Seattle led to Schwartz's first goal of the night as he got an open look on Kahkonen and buried it just 59 seconds after Bjorkstrand's tally to make it a 6-4 game.

After Meier's third goal again cut into a Seattle lead. Beniers whipped home an open look on Kahkonen off a feed from Jared McCann and Schwartz tossed in a empty net effort from center ice to polish off the victory for the Kraken.

Seattle's finishes the home stand with a 4-1-1 record in six games as they continue to show they are a factor in the playoff race as the season nears its quarter mark.

"It was an important home stand," Hakstol said of the Kraken, who were 2-3-1 at home before the current six-game stay. "We had to answer a question there. To be honest with you, we had to answer a question in terms of our play here at home, and really embracing the feel here at home and trying to take advantage of the great fans and the great crowd that we have. We were able to do that."