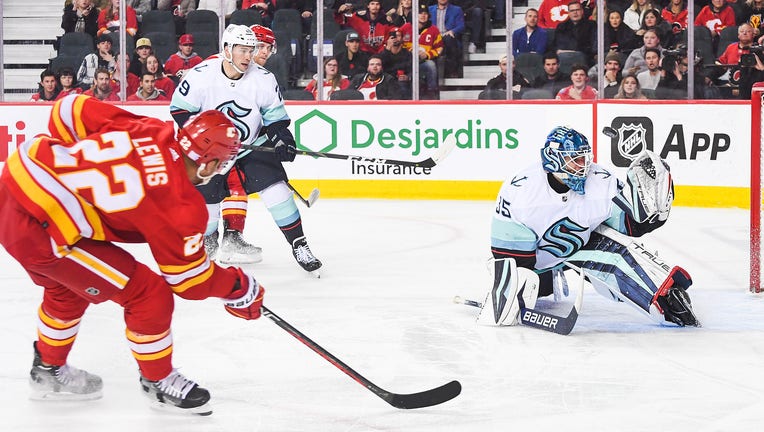 CALGARY, CANADA - NOVEMBER 1: Trevor Lewis #22 of the Calgary Flames takes a shot on Joey Daccord #35 of the Seattle Kraken during the third period of an NHL game at Scotiabank Saddledome on November 1, 2022 in Calgary, Alberta, Canada. The Kraken de

CALGARY, Alberta - Daniel Sprong, Yanni Gourde and Matt Beniers scored in a five-minute span of the third period and the Seattle Kraken beat the Calgary Flames 5-4 on Tuesday night.

Carson Soucy and Morgan Geekie also scored as the Kraken beat the Flames for the first time. Oliver Bjorkstrand had a pair of assists and Joey Daccord stopped 36 of 40 shots for the win in his first start of the season.

"We’ve got so much more confidence in this group," Gourde said. "Last year was last year. We know we can rally back and we know we have the skills to do it."

Tyler Toffoli had a goal and an assist for Calgary to reach 400 career points. Nazem Kadri, Nikita Zadorov and Trevor Lewis also scored for the Flames, who led 4-2 early in the third.

Elias Lindholm added a pair of assists. Dan Vladar stopped 21 of 26 shots in the loss.

"We kept turning the puck over and eventually it was going to bite us," Toffoli said. "That’s what happened."

Calgary was up 2-1 against Edmonton on Saturday but lost 3-2.

"We’re not happy. We’re an older group and we know good teams don’t do that," Toffoli said.

Calgary scored twice in a 17-second span starting at 1:34 of the third period for a 4-2 lead, but Seattle responded with power-play, short-handed and even-strength goals to pull ahead.