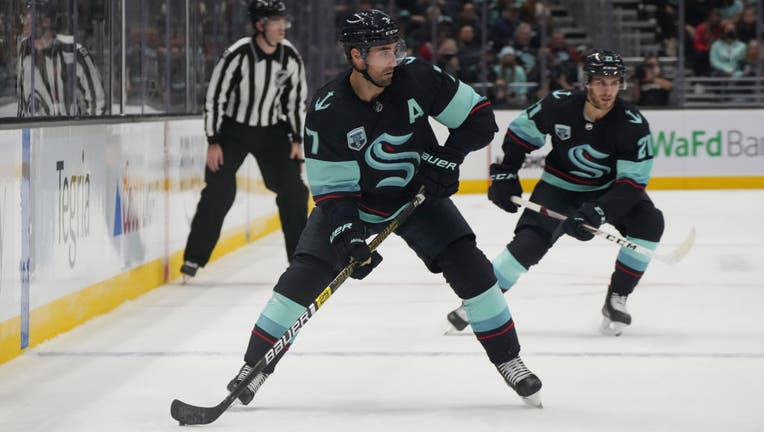 SEATTLE, WA - OCTOBER 26: Seattle Kraken right wing Jordan Eberle (7) looks across the ice during an NHL game between the Montreal Canadiens and the Seattle Kraken on October 26, 2021 at Climate Pledge Arena in Seattle, WA (Photo by Jeff Halstead/Ico

SEATTLE - Brandon Tanev had two goals and Jordan Eberle added another to give the Seattle Kraken their first home win in franchise history, beating the Montreal Canadiens 5-1 on Tuesday night.

Mike Hoffman scored for a second straight game for Montreal, but it was an ugly start to its West Coast trip. Montreal is last in the Eastern Conference with just two points in six games and being outscored 24-11.

Eberle got Seattle started by scoring 62 seconds into the game with his first of the season.

Then Tanev, who is quickly becoming a fan favorite and is the unlikely goal-scoring leader for Seattle with five in seven games, redirected a pass from Jamie Oleksiak for the 2-1 lead late in the first period.

Yanni Gourde scored his first of the season on a nifty backhanded sweep around Montreal goalie Jake Allen during the second period. Gourde also assisted on Tanev’s second goal, when he beat Allen by catching Montreal in a change midway through the second period for a 4-1 Kraken lead.

Tanev had seven goals in 32 games last season and his career high of 14 goals came in 2018-19 with Winnipeg.

Allen made 21 saves, but he had little help from Montreal’s defense on each of the first four goals.

Ryan Donato scored the fifth for Seattle on a breakaway early in the third period.

Philipp Grubauer made 23 saves in Seattle’s most complete performance of the season after surrendering a third-period lead in its home opener Saturday in a loss to Vancouver. Seattle’s five goals on Tuesday were a season high and came on just 26 shots.

Tanev’s scoring is a big bonus for Seattle’s offense but getting Gourde and Eberle going is just as important.

Eberle was one of the more prominent offensive selections Seattle made in the expansion draft but his first couple of weeks had been filled with scoring frustration that started when he rang the crossbar with an open net only moments into Seattle’s first game in Vegas.

He seemed to let out some of that frustration Tuesday when he flicked a wrist shot past Allen in the opening seconds. 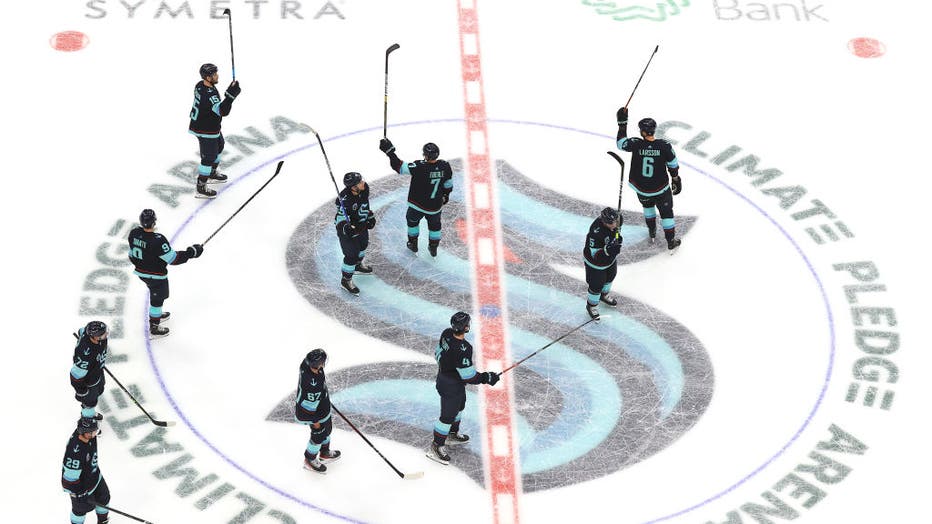 SEATTLE, WASHINGTON - OCTOBER 26: The Seattle Kraken raise their sticks to celebrate after defeating the Montreal Canadiens by a score of 5-1 to win their first home game in franchise history at Climate Pledge Arena on October 26, 2021 in Seattle, Wa

Prior to the game, Seattle honored the 1917 Seattle Metropolitans, who defeated the Canadiens to become the first American team to win the Stanley Cup. Seattle unveiled a banner commemorating that victory that’ll hang from the rafters of Climate Pledge Arena.

NOTES: Seattle’s Mason Appleton injured his right leg late in the second period when he was pinned awkwardly against the boards by Sami Niku. Appleton left the ice without putting weight on the leg. Niku was called for holding on the play. ... Montreal’s Jonathan Drouin skated in his 400th career game in the NHL ... Seattle F Jared McCann has a four-game point streak, tying a career high.