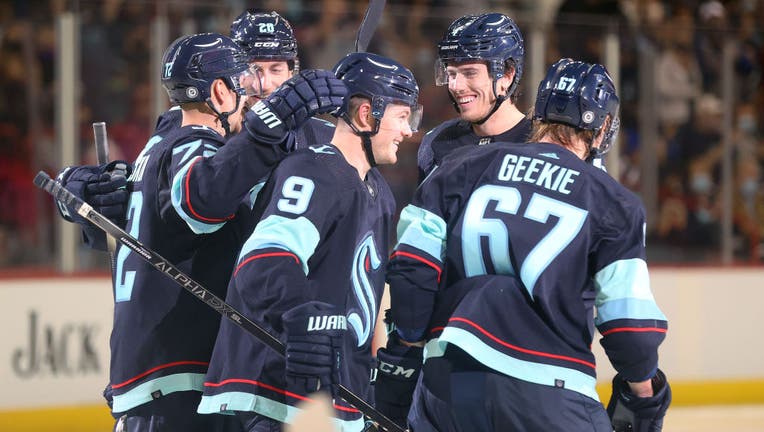 SPOKANE, WASHINGTON - SEPTEMBER 26: The Seattle Kraken celebrate the goal by Morgan Geekie #67 of the Seattle Kraken to take a 4-3 lead against the Vancouver Canucks in the third period during a preseason game at Spokane Veterans Memorial Arena on Se (Q13 FOX)

SPOKANE, Wash. - The concourses of the Spokane Arena were jammed. The merchandise lines snaked through the crowds, causing bottlenecks as fans filed in for their first glimpse of the Seattle Kraken.

There seems to be little doubt about the popularity and reach of the NHL’s newest franchise, even when playing 300 miles away from home.

"It was unbelievable to be honest. I mean, I’m from the East Coast so I’ve never been out here. It just goes to show how exciting hockey is, how much it’s growing," Seattle’s Ryan Donato said. "Coming in here and seeing all the Kraken jerseys and how everything’s growing so fast, it’s truly awesome to be a part of."

Seattle made its debut on Sunday night with a 5-3 win over the Vancouver Canucks in the preseason opener for both teams. With Seattle’s home arena putting the finishing touches on its construction, the Kraken have taken their first preseason on the road to three junior hockey venues in the state.

Spokane was first up, and the 10,208 fans were treated to the Kraken rallying from a 2-0 deficit thanks to three goals in the second period and Morgan Geekie’s two goals in the third period.

It wasn’t quite like the preseason debut Vegas had in 2017, when it scored nine goals against Vancouver. But the "home" fans went home happy.

"It’s great to be back in a full building," Seattle coach Dave Hakstol said. "We’ve all missed that for a long time. To be able to do it here was great."

There was necessity related to Seattle’s decision to trek across the state for its first game. The home arena for the Kraken — Climate Pledge Arena — is still a couple of weeks from completion and Seattle’s first home game is Oct. 23 against the Canucks.

But there was also a specific outreach behind the decision to play in Spokane rather than keeping all their preseason games in the Puget Sound region. The Kraken envision themselves a brand for the entire Pacific Northwest and their regional broadcasts will have games being shown throughout Washington, but also into slivers of Northern Idaho and Western Montana.

Playing in Spokane was a way to acknowledge that segment of the fan base, and a way to help establish a connection with the area.

"Tonight is validation that our market isn’t just the Seattle DMA. The amount of people wearing Kraken merchandise, the sincere enthusiasm, there couldn’t be a better place to start," Kraken CEO Tod Leiweke said shortly before puck drop. "This is just magnificent. It’s heartwarming. It’s stirring and I feel emotional just walking that concourse."

While the Kraken will play their final two home preseason games in the Puget Sound area, there could be opportunities in the future for Seattle to take its product on the road in the preseason. Alaska has been a market the Kraken have specifically focused on — including promoting donations to help reinstate the men’s hockey program at the University of Alaska Anchorage. Kraken games will be broadcast throughout Alaska and landing that territory as part of their broadcasting rights was a big win for the franchise.

"We hope that through these three games that our partners and us raise, targeting the half a million dollars, that’s how you build relationships. Going up to Alaska and supporting the effort to save the Seahawks hockey program that’s how you build support," Leiweke said. "Easiest way to do it is winning but there’s other things that are also fundamental to the mission."

For the first night, the focus was on Spokane and giving a jolt to a normally sleepy Sunday night in the Lilac City. At Lord Stanley’s, a recently opened hockey bar downtown, fans packed every table of the restaurant several hours before the game. While there were NFL games on the TVs and a handful of fans in Seahawks jerseys, Kraken logos and gear dominated — with the exception of two fans in Red Wings jerseys. And even in the midst of a Sunday afternoon filled with NFL games, TVs were also tuned to the Boston-Washington NHL preseason game.

"Just kind of crazy seeing people for the first time again," McCann said. "Some of us haven’t seen them in a long time. So it’s great."