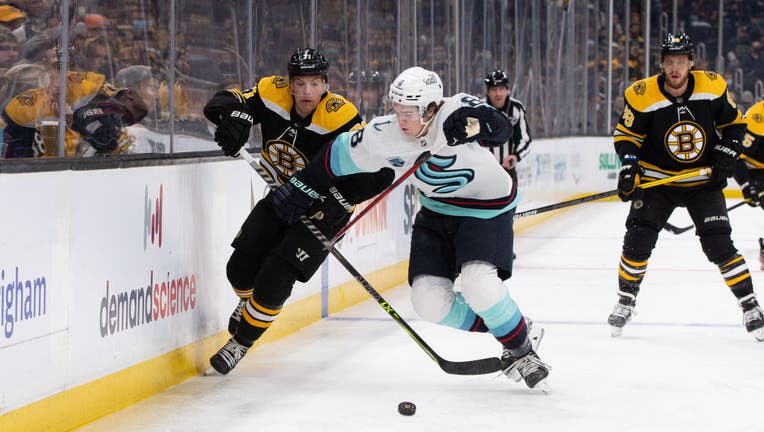 BOSTON, MA - FEBRUARY 1: Cale Fleury #8 of the Seattle Kraken checks Taylor Hall #71 of the Boston Bruins during the first period at the TD Garden on February 1, 2022 in Boston, Massachusetts. The Bruins won 3-2. (Photo by Richard T Gagnon/Getty Imag

The Seattle Kraken recalled defenseman Cale Fleury from the Charlotte Checkers on Tuesday.

Fleury, 23, is the younger brother of fellow Kraken defenseman Haydn Fleury. He's appeared in just two games for Seattle this season against the Boston Bruins and New York Islanders in February. He had four blocks and three hits and was on the ice for one goal against.

"I think just being comfortable with the pace is the biggest thing for me, especially as a (defenseman), breaking pucks out and things. You've got to do everything a step quicker in the NHL and I think I adjusted well last time," Fleury said.

Fleury gives the Kraken defense some additional depth as Haydn remains sidelined with an upper body injury. Haydn has missed the last five games for the team. Via Mike Benton of the Kraken Audio Network, Fleury was working alongside Jamie Oleksiak during the team's practice on Tuesday.

With Haydn still out, the Kraken didn't have any extra depth available on defense. With back-to-back games against the St. Louis Blues and Chicago Blackhawks on the road the next two days, Fleury bolsters the team's depth on the back end.

Fleury appeared in 41 games for the Montreal Canadians during the 2019-20 season. He has one career goal as has a plus-minus of -5 in his 43 career games played.