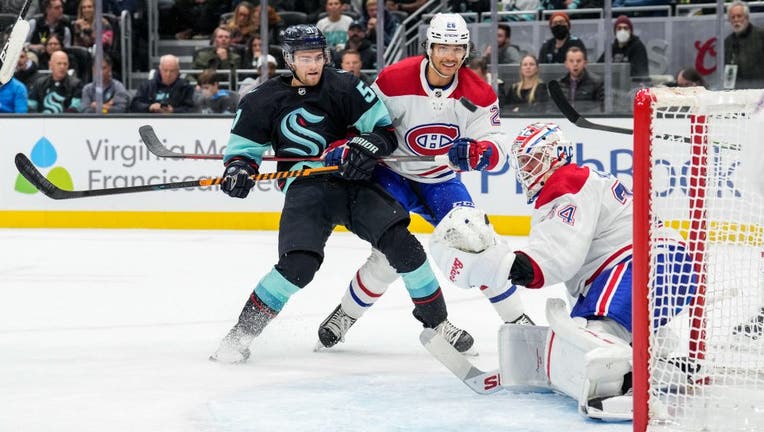 SEATTLE, WASHINGTON - DECEMBER 6: Shane Wright #51 of the Seattle Kraken attempts to score his second goal of the game as Jake Allen #34 of the Montreal Canadiens makes a save during the first period of a game at Climate Pledge Arena on December 6, 2

Fresh off winning a gold medal as captain of Team Canada in the IIHF World Junior Championship, the Seattle Kraken reassigned top draft pick Shane Wright to the Kingston Frontenacs of the Ontario Hockey League.

Wright had seven points in seven games played for Canada with three goals and four assists. He scored in the gold medal game Thursday night as part of Canada's 3-2 overtime victory over Czechia to win the gold medal.

"We're very proud of Shane's performance at the World Juniors, helping captain Team Canada to a gold medal," Kraken G.M. Ron Francis said, via Bob Condor of the team's website. "He has a bright NHL career ahead of him with the Kraken and now has an opportunity to lead his junior team as they compete for a Memorial Cup. We look forward to watching him the rest of this season and wish him well."

Wright played in eight games for the Kraken this year with a goal and an assist in limited playing time for Seattle. With the Kraken firmly in the playoff chase as the season nears the midway point, the Kraken weren't going to have sufficient playing time available for Wright to continue his development at the NHL level.

By reassigning Wright to his junior team in Kingston, his three-year entry level contract will slide to next year. A player can play in nine games in the NHL and still have their contract slide a year if they are returned to their junior team. Due to an agreement between the NHL and the Canadian Hockey League (OHL, WHL, QMJHL), players under 20 years old that are drafted from their teams can't be sent to the American Hockey League, which serves as the NHL's top minor league system. Due to the agreement, a reassignment to the Coachella Valley Firebirds this year was not possible for Wright.

Wright did play in five games for the Firebirds as part of a one-time only conditioning stint prior to being loaned to Team Canada for the World Juniors. Wright scored four goals in five games with the Firebirds before returning to Seattle. He made one more appearance with the Kraken against the Montreal Canadiens, where he scored his first NHL goal.

The Kraken have stayed healthy at center all season. Alex Wennberg, Matty Beniers, Yanni Gourde and Morgan Geekie have primarily staffed the four lines in the middle through the season's first 37 games. Gourde has occasionally moved to wing and Ryan Donato has handled fourth line center duties on night's Geekie has been out of the lineup. But generally, all four centers have played well and aren't losing ice time to get Wright in action.

Wright had 94 points for Kingston last year before he was selected by the Kraken with the fourth overall pick in the NHL Draft. He scored 32 goals with 62 assists in 63 games played for the Frontenacs.