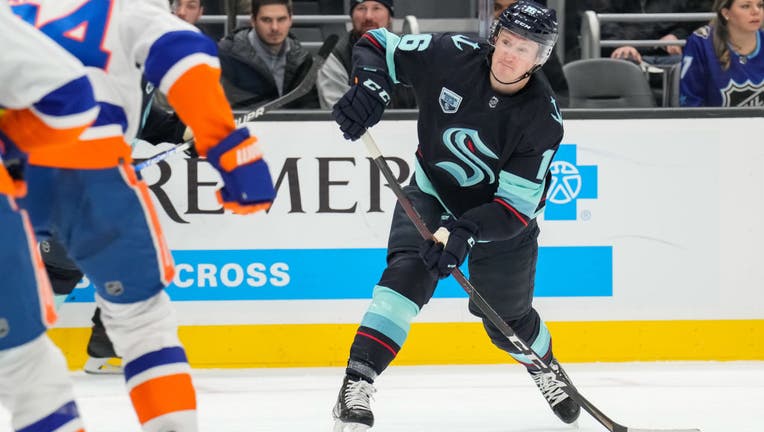 SEATTLE, WASHINGTON - FEBRUARY 22: Jared McCann #16 of the Seattle Kraken takes a shot on net during the second period of a game between the New York Islanders and the Seattle Kraken at Climate Pledge Arena on February 22, 2022 in Seattle, Washington

McCann, 25, leads the Kraken with 33 points through 50 games played with a career-high 21 goals scored.

"Obviously it's a huge honor to get that deal and to be a part of this for the future," McCann said.

McCann was set to be a restricted free agent after this season. Instead, he'll be with the team for another five years. Seattle selected McCann in the NHL expansion draft this summer away from the Pittsburgh Penguins, where he'd spent the previous two-plus seasons.

"This the first restricted free-agent signing for the organization, so I think it sends a message," General Manager Ron Francis said. "In Jared’s case, he’s excited to be in Seattle. A lot of our players are happy with the way the ownership and management treats the players. They’re excited about the passionate fan base and the city itself. They want to be here as you become more successful."

McCann's previous career-high in goals in 2018-19 in a season split between the Penguins and Florida Panthers. He scored 19 goals overall on the season with eight coming with the Panthers and 11 with the Penguins after a mid-season trade.

"It’s consistency," McCann said of his career-year with the Kraken. "That’s definitely the hardest thing to do in the NHL is be a consistent player. I feel like the last two years I’ve grown a lot in that area."

McCann has recorded 188 points (87 goals, 101 assists) in 403 regular-season games for the Kraken, Penguins, Panthers and Vancouver Canucks. He scored a career-high 35 points (19 goals, 16 assists) in 2018-19. He has added three assists in 12 career postseason games, all with the Penguins.

"I was given the opportunity to be a top-line guy here," McCann said. "Every other place that I’ve been, sporadically, I was able to do that and show that I can be a top player. As soon as that happened, I knew I wanted to be here… there’s lots to do around the city and my girlfriend loves it there too. So, it was a pretty easy choice, a lot of great food. I’m a big sushi guy, so it’s good."

McCann was originally selected by the Vancouver Canucks in the first round (24th overall) of the 2014 NHL Draft.