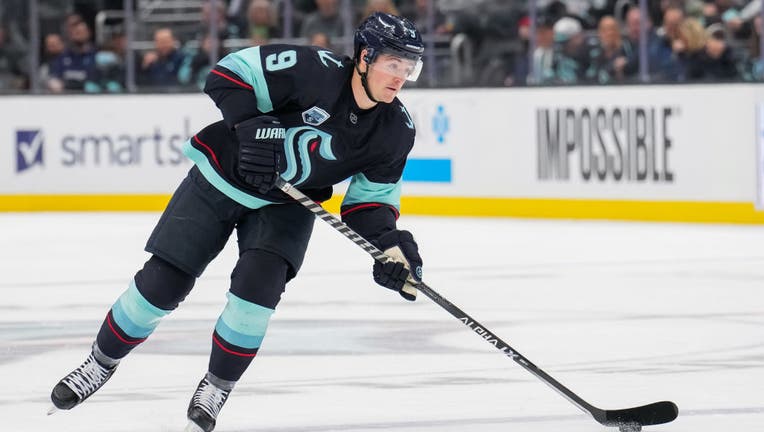 SEATTLE, WASHINGTON - APRIL 29: Ryan Donato #9 of the Seattle Kraken attacks the offensive zone with the puck during the first period of a game against the San Jose Sharks at Climate Pledge Arena on April 29, 2022 in Seattle, Washington. (Photo by Ch

The man who scored the first goal in Seattle Kraken history will have the chance to add to the team's total this fall.

The Kraken have re-signed forward Ryan Donato to a one-year contract worth $1.2 million, the team announced on Wednesday.

"Ryan elevated his game last season and we’re happy to have him return to the Kraken," Kraken general manager Ron Francis said in a statement. "He completed a career year and will hopefully eclipse that in 2022-23."

The Kraken had declined to tender Donato as a restricted free agent as they didn't want to go to arbitration.

"Hell of a season last year. Being honest, we just didn't want to go to arbitration with him. That's why we didn't qualify him. We certainly like the player," Francis said of the decision earlier this month.

Donato, 26, had a career-year in his first season in Seattle. He sets new career highs in points (31) and goals (16) and matched a career-high in assists (15). His goal against the Vegas Golden Knights in the team's first game last October served as the first in franchise history.

Donato ranked fourth and sixth, respectively, on the team in goals and points. He also scored the first-ever shootout-deciding goal in the team’s first shootout victory on Jan. 17 vs. Chicago.