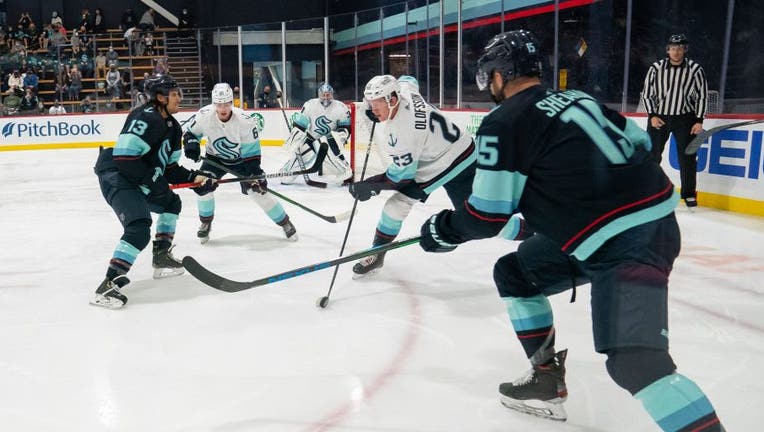 SEATTLE, WASHINGTON - SEPTEMBER 25: Gustav Olofsson #23 of the Seattle Kraken skates with the puck during a scrimmage at the Kraken Community Iceplex on September 25, 2021 in Seattle, Washington. (Photo by Christopher Mast/NHLI via Getty Images)

The Seattle Kraken re-signed veteran defenseman Gustav Olofsson on Friday to a one-year, two-way contract worth $750,000.

Olofsson, 27, initially signed with the Kraken last August in the lead up to the franchise's first training camp. He spent the entire year playing for the Charlotte Checkers of the American Hockey League, which was the Kraken's minor league affiliate last season. He played in 41 games for the Checkers with two goals and seven assists from the blue line.

"We are happy to be welcoming Gustav back to the Kraken organization," Kraken general manager Ron Francis said in a team statement. "Gustav is a strong presence on the blue line and was a great veteran presence for our prospects in Charlotte this past season."

Olofsson added a goal and two assists in seven playoff games for Charlotte.

Olofsson has appeared in 59 career games in the NHL during stints with the Minnesota Wild and Montreal Canadians.  He was a second-round pick of the Wild in 2013.