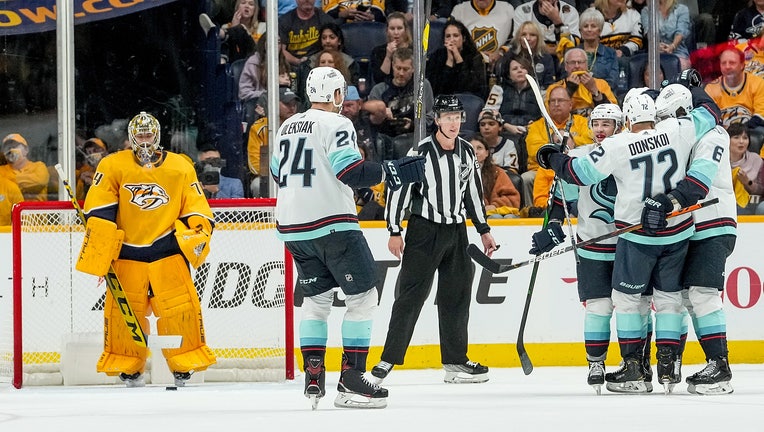 NASHVILLE, TN - OCTOBER 14: The Seattle Kraken celebrate a goal against Juuse Saros #74 of the Nashville Predators during an NHL game at Bridgestone Arena on October 14, 2021 in Nashville, Tennessee. (Photo by John Russell/NHLI via Getty Images)

NASHVILLE, Tenn. - The Seattle Kraken wound up having to wait longer to play their first regular-season game on home ice than they did their first victory.

Brandon Tanev scored his second goal into an empty net with 1:21 left, and the Kraken beat the Nashville Predators 4-3 Thursday night for the first victory in the expansion franchise’s second game.

"I think it’s phenomenal," goalie Philipp Grubauer said. "It doesn’t only speak for the group, it speaks for the organization and rewards the people that put in the work for two years or longer."

Alex Wennberg and Jared McCann each had a goal and an assist for Seattle, which is playing its first five games away from home while the final touches are put on the Kraken’s new arena.

Coach Dave Hakstol said it was good to get the first win in franchise history.

"I think you saw a little bit of that stress in us in our play in the third period," Hakstol said. "Guys were calm and pretty focused. I know guys were really excited to be able to get the first win, especially as it sinks in. It’s the first win in franchise history, that’s a big deal for everybody."

Tanev’s second goal on Seattle’s lone shot in the third period was the winner. Mikael Granlund, who also had two assists, scored with 39.9 seconds left to pull Nashville within 4-3. The Predators couldn’t beat Grubauer again, even with goalie Juuse Saros still out for the extra attacker.

Grubauer made 12 saves in the third as Nashville outshot Seattle 30-26 in the game. The goalie credited the Kraken keeping it simple, even as they will need to quit giving up so many shots in the final period.

"Overall, we grinded it out," Grubauer said. "It’s always difficult to get the first one out of the way, and we did."

Wennberg said the Kraken took a bit of a step back in the third, trying to play safe protecting the lead. That’s not the tactic they’ll want in the future. He said getting that first franchise victory mattered more.

"We really wanted this win," Wennberg said. "And sometimes at the end, it isn’t always pretty, but we’ve got to play that way to win and today we did whatever it takes."

Roman Josi and Eeli Tolvanen scored for Nashville, and Filip Forsberg had two assists. The Predators came in with a .614 winning percentage in season openers, fourth-highest in NHL history for franchises with at least 10 such games. The Predators also had won seven of their last eight home openers and 11 of 14.