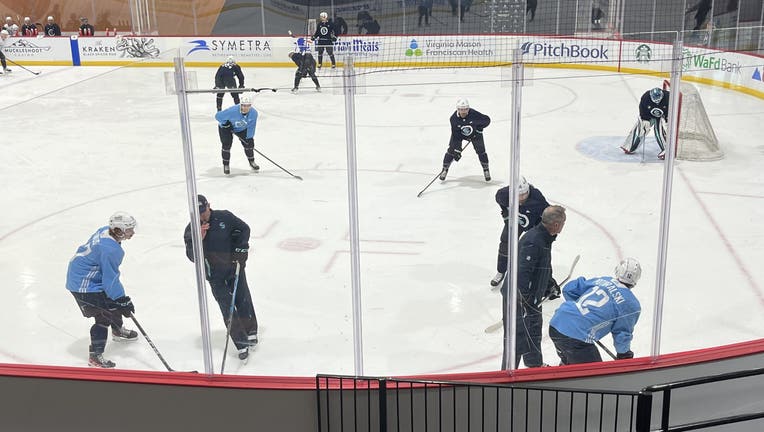 Forwards Jagger Firkus (No. 57) and Andrew Poturalski (No. 12) get set up for a drill during the first day of training camp for the Seattle Kraken on Sept. 22, 2022. (photo by Curtis Crabtree / FOX 13 Seattle)

SEATTLE - As the Seattle Kraken enter their second season of play in the NHL, the team is quite eager to go through a training camp without absolutely everything being new experiences.

"It's a different situation," head coach Dave Hakstol said as training camp opened on Thursday. "We still have a lot of work to do. As you look around the room, you're gonna see a lot of new names that weren't in this dressing room at the end of last year. We have that as an opportunity and a challenge, but certainly we're quite a ways ahead of where we were starting last year, just in terms of people, systems, everything all included."

Sure, Andre Burakovsky, Oliver Bjorkstrand and first-round pick Shane Wright are among the high-profile new additions to the team from the summer. Defensemen Justin Schultz, Michal Kempny and goaltender Martin Jones add some veteran depth to the club as well and will likely get significant playing time throughout the season.

But while there is still plenty of new, there's far more that's not. And that gives the returning Kraken players a boost as they enter their second season in Seattle.

"I think we've all been through it obviously last year being the first season in Seattle," winger Brandon Tanev said. "But this year it's all business right from the get-go. I don't think there's any time warming up to things. I think we've got to get out there, we have to compete, we have to get ready for the season and it all starts today with camp."

The inaugural season of the Kraken last year will perhaps be one of the most unique experiences ever for a new professional sports franchise in the four major sports. Not only did the Kraken have to get used to a new city, new coaches, new teammates, new arena and a whole new hockey experience on the ice, they had to do so under the umbrella of a global pandemic that severely stunted the team's ability to build chemistry and relationships due to ongoing COVID-19 mitigation protocols.

"It was hard last year with COVID and everything to kind of get to know each other," goaltender Philipp Grubauer added. "Everybody was a little bit scared that you'd have to miss like three or four weeks if you hang out or like due to the COVID protocol. So there was not much like team building off the ice. But now everybody knows each other. Everybody feels comfortable. And I think that's a huge part to this year."

So while Burakovksy, Bjorkstrand and Wright are welcome additions to a team looking to take a sizable leap forward in their second season of competition, the learning curve won't be nearly as sharp.

No one is going to put labels on the expectations for this season. With the additions the team has made at forward, the Kraken should be more dynamic offensively. Burakovsky and Bjorkstrand are each coming off career-high points seasons with the Colorado Avalanche and Columbus Blue Jackets, respectively. Burakovsky won a Stanley Cup with the Avalanche this summer and was the highest-profile free agent signing by Seattle this offseason.

"We got a lot of new players," Schwartz said. "We got a lot better over the summer and I think each guy's hungry to prove ourselves and prove to each other that we can be a lot better, more competitive and being a lot better spot this year come March and April."

Hakstol also said the Kraken want to be in the race for a postseason berth this spring .

"I sat here last year and said we want to be competitive every night," he said. "And if you think we're going to go into day one and not have our sights set on competing for a playoff spot, you'd be sorely wrong.

"I'm not making any predictions. I'm just telling you that we're going to put the work in and we're going to have a great mentality. And we're really excited to kind of undertake that challenge and improve in every way on what we did last year. Not all of that shows up. Some of the good things that we did last year don't really show up in the point totals. So we've got to, we've got to improve every little piece of our game. And you know, obviously, we have to have that show itself in the point standings."

After finishing with a third-worst 60 points last year, the Kraken will need to add around 25 points to their total to have a reasonable chance to make the playoffs. The Nashville Predators were the last team in the postseason in the Western Conference with 97 points (45-30-7). The Kraken (27-49-6) will need to win far more games this season to get into that mix.

– Center Matty Beniers said that he's added 11-12 pounds of muscle this offseason as he gets set to enter his first full season of NHL action.

"The biggest thing was off-ice, working out, getting bigger, stronger," Beniers said. "Putting on weight, but good weight. Not weight that's just going to get lost right when we get into training camp or into the season."

– Left winger Jaden Schwartz is returning from an undisclosed upper body injury that wiped out nearly half of his first season in Seattle. Schwartz played in just eight games after Dec. 29.

"All I can say is I got a lot of tests done, seen a lot of doctors and went down some different paths and feel like I got good help and feel like it can help me a lot this year. So I feel good right now."

– Forward Brandon Tanev is also back on the ice after missing most of the season to a torn ACL. Tanev was injured in a Dec. 18 game against the Edmonton Oilers. Tanev said Thursday that he doesn't feel like he has any restrictions at this point.

"I think it's just a long process," Tanev said of his recovery. "Obviously there's some ups and downs and adversity you're gonna face but at the end of the day I had a great support staff around me and we all grinded through it and got ourselves ready for the season here.

"Obviously it took a little bit time and learning to do things that came so easily, but I think once you're back on the ice and back out there with your teammates and back in the city of Seattle, you're excited to be back here for training camp and ready to get the season started."

– Head coach Dave Hakstol said he hopes to get some of the line pairings in place prior to the end of the preseason so the lines can build some chemistry before the opener against the Anaheim Ducks on Oct. 12.

– New Kraken forward Oliver Bjorkstrand on what he's looking forward to in joining the team after a trade from the Columbus Blue Jackets this offseason.

"It's exciting," Bjorkstrand said. "Definitely want to be part of building something special here. Seems like there's a lot of excitement around the city with this team and we want to be good this year. So it's going to be fun."

– Goaltender Philipp Grubauer on the addition of Andre Burakovsky as a free agent this summer. Grubauer played with Burakovsky with the Colorado Avalanche and Washington Capitals before reuniting again with the Kraken.

"I can't get rid of Burky," Grubauer joked. "He's following me everywhere. … Burky was a huge part of the Cup run in Washington, huge part in Colorado. It's time for him to make it three.

"Awesome (that he signed here). I love that. I was joking with him during the year last year when we played Colorado 'hey, you want me to keep a stall open for you during the year?' So he finally signed and it was nice to have him on board because I've known him since almost I got drafted. So it's a long time and happy that he's here."

– Head coach Dave Hakstol on top draft pick Shane Wright and his impressions of Wright since the NHL Draft.

"Well he's an outstanding young man," Hakstol said. He's a guy that's really well-liked by the guys in the room. He's got an easy way about him. He's obviously done some work because coming in through a short day of testing, he did a good job there. And I like what we've seen on the ice, both through the two days of rookie camp and the way that he's been able to maintain his level and pace of play again today." 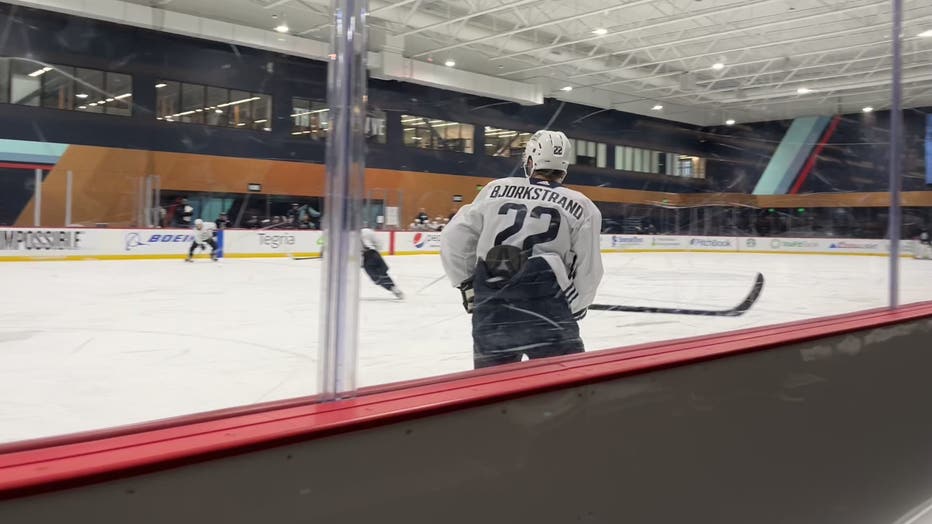 Seattle Kraken forward Oliver Bjorkstrand skates during a scrimmage in his first practice with the team during training camp on Sept. 22, 2022. (photo by Curtis Crabtree / FOX 13 Seattle)