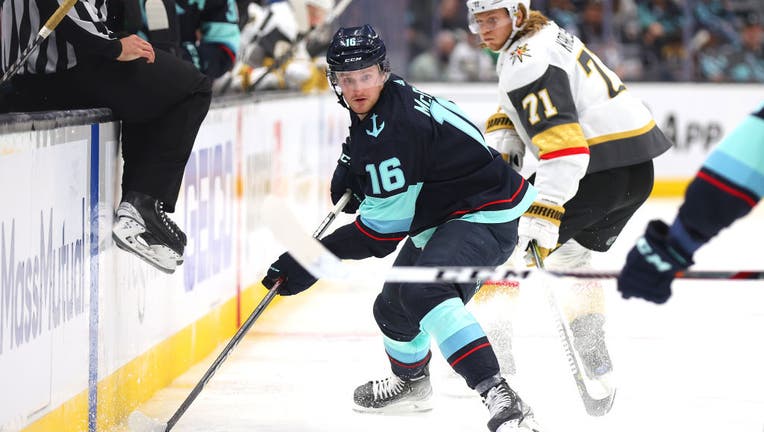 SEATTLE, WASHINGTON - MARCH 30: Jared McCann #16 of the Seattle Kraken controls the puck against William Karlsson #71 of the Vegas Golden Knights during the second period at Climate Pledge Arena on March 30, 2022 in Seattle, Washington. (Photo by Abb

It was only a matter of time before the Kraken (21-40-6, 48 pts) were officially knocked out of postseason contention. They've had among the worst records in the NHL for a sizable chunk of the season. After the loss to Vegas, the Kraken sit just one point ahead of the Arizona Coyotes and Montreal Canadians for the worst mark in the league with just 15 games left to play.

With it clear that the playoffs weren't in the cards, the Kraken traded away several veteran players before the NHL trade deadline. Captain Mark Giordano, Colin Blackwell, Calle Jarnkrok, Marcus Johansson, Jeremy Lauzon, and Mason Appleton were all dealt away to new teams.

The Kraken took a conservative approach in the NHL Expansion Draft last summer, prioritizing salary cap space and roster flexibility as they built their roster. The team was still expected to be capable of chasing a playoff spot with strong goaltending and defense as its emphasis.

Instead, the goaltending efforts of Philipp Grubauer and Chris Driedger have fallen short of expectation, and a number of injuries to forwards have impacted an already limited offensive group. The Kraken rank 27th in the NHL in goals against allowed at 3.51 per game. That's despite allowing the fourth-fewest shot attempts in the league.

The Kraken have loaded up on draft picks over the next three years and hope to use those assets to acquire more NHL-level players as well through future trades. Top draft pick Matty Beniers is expected to join the roster after the conclusion of his college season at the University of Michigan as well.

But that's for 2022 and beyond. The 2021 season will officially end against the San Jose Sharks on April 29.